A new veterans memorial in Albia, Iowa is being criticized by Americans United for Separation of Church and State because the taxpayer-funded monument includes 21 marble Christian crosses: 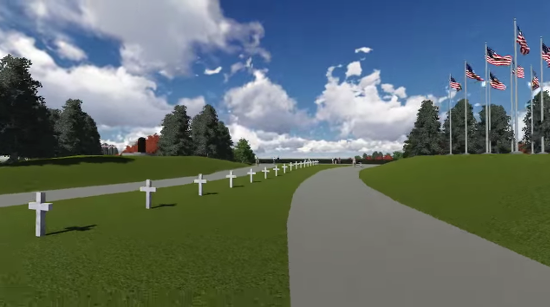 In the letter, Americans United, says the use of government resources to support religious displays is a violation of the First Amendment and asks that the crosses be removed and government funds returned.

Jim Keller, Founder of the Welcome Home Soldier Monument, says the crosses aren’t coming down — even if he has to go to jail to preserve them:

“It really hurt because [the complaint] was anonymous. If they would have come to us and talked to us, I don’t think I would have been able to change their mind but at least I would have had the opportunity to. I will not take down the crosses. Personally, I will not do it. I will go to jail before I’ll ever do that,” said Keller.

Just to be clear, no one is complaining about honoring veterans. The problem is this implication that all soldiers are, by default, Christian. And if that’s not the message Keller wants to send, then why include the crosses? They’re far better known as a symbol of Christianity than as a symbol of death.

For now, the Monroe County Attorney’s Office says the crosses will remain. They’re practically daring AU to file a lawsuit. No word yet on whether AU will bite.

April 13, 2016
Conservatives Are Certain the IRS Has Secret Rules for Investigating Churches. They're Wrong
Next Post

April 13, 2016 Amid Sarah Palin Debate Rumors, Bill Nye Goes Live to Say It's Not True
Browse Our Archives
What Are Your Thoughts?leave a comment