After the bombardment of fallacious rumors surrounding Bill Nye‘s appearance following a climate change denial propaganda film, Nye himself took to Facebook Live to set the record straight — he’s not debating Sarah Palin, he’s not appearing on the panel (aside from a video clip), and he wasn’t even invited to the shit-show. 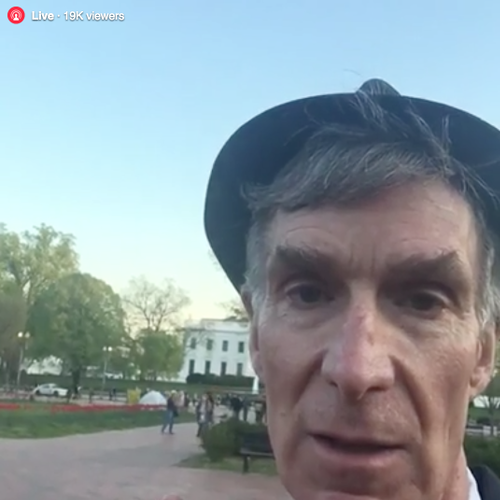 It all started when several click-hungry “news” websites embellished a press release that advertised a panel discussion following the film premiere of Marc Morano‘s Climate Hustle as a debate between Nye and Palin. CFACT.org, a group that lobbies carbon deregulation for the fossil fuel industry (where Morano happens to be communications director), was reckless in the press release wording. Although it could only desperately be misconstrued as a debate, it did strongly imply that Bill Nye would be present:

Cinema audiences will learn more about the topic through a panel discussion with welcoming remarks by Congressman Lamar Smith (R-TX), Chairman of the House Science, Space and Technology Committee, headlined by Governor Sarah Palin, 2008 Republican Vice Presidential Candidate and 9th Governor of Alaska, moderated by Brent Bozell, Founder and President of the Media Research Center and will also include other notable experts including renowned climatologist Dr. David Legates and a special appearance by Emmy Award-winning educator Bill Nye the Science Guy.  This riveting discussion will focus on climate change and issues brought up during the event.

Well gosh, CFACT. Had you made that clear from the get-go, you wouldn’t have received all that film publicity. Oh, wait!

As we reported two days ago, the footage of Nye is being extracted from a conversation he had with Morano at a public park in late March. Present at the meeting was Jason Sussberg and David Alvarado, the duo behind The Bill Nye Film, who have made a sample of that recording available for a DeSmogBlog story:

A pre-recording is without a doubt preferable for Morano’s camp, who (again) didn’t even invite Nye to appear live. It’s far easier to make your rehearsed rebuttals when your opponent isn’t there in the flesh to fight back, especially when he’s packing better data.

The real story here is the same one we see with other science-denying, sinister agenda-touters like Ken Ham. Ham and Morano flounder without the mainstream media’s attention, and they need a massive public conduit like Nye to give them the time of day. Even writing this post gives me guilt that Morano’s publicity-begging antics are working.

To that, I beg you to help financially starve these environment-dissing thugs out of business.