Turkish President Recep Tayyip Erdoğan (pictured) and Germany’s Chancellor Angela Merkel aren’t too comfortable with each other right now, and it’s all the fault of a strikingly foul-mouthed German TV comic. 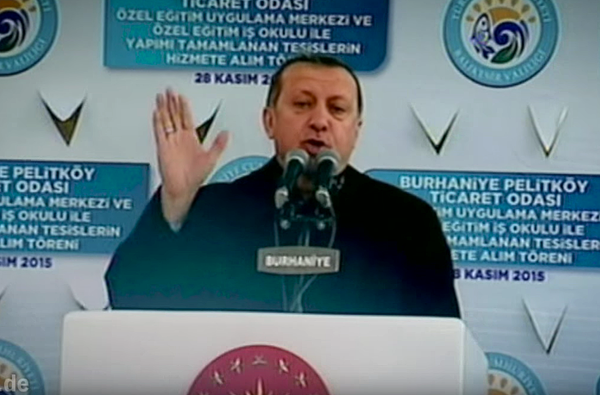 The right-wing Islamic strongman is reportedly livid over a poem scandalizing him, written by comedian and satirist Jan Böhmermann, who recited it on national German TV the other day.

Reading a poem laced with profanity in front of a Turkish flag and a portrait of Mr. Erdoğan, Mr. Böhmermann openly acknowledged that he was being deliberately offensive. The prior critique of the Turkish leader, he made clear, had simply been too mild.

That prior critique was a pleasant-sounding but hard-hitting protest song about the Turkish head of state, put together by a German TV team. The song, accompanied by archival footage of Turkish authorities being alternately pompous, clumsy, and aggressive, aired just last month. Erdoğan subsequently tried to suppress the video without reckoning with the Streisand effect. Normally, the broadcast in question gets at most 400,000 viewers. But after the great leader, in a state of rage, summoned the German ambassador, the droll ditty, reissued with English subtitles, went viral. It has so far racked up more than 6.8 million views on YouTube.

As for Jan Böhmermann and his poem, the Turkish Embassy in Germany has demanded that local authorities prosecute the comedian under a dormant German law that forbids insulting foreign dignitaries. And insult Erdoğan, Böhmermann knowingly did, with hyper-crude lines like

He loves to fuck goats,
and suppress minorities.

His dick smells badly like kebab,
even a pig fart smells better.

So far, it’s all just an amusing episode that highlights Erdoğan’s infamous pettiness and, perhaps, the odd excesses of certain bawdy funnymen.

But the whole affair is also a serious political conundrum for Merkel. Since Germany and Turkey brokered an agreement on the Syrian-war crisis, Merkel is depending on the Erdoğan administration to help stanch the flow of even more Syrian refugees into Europe, and especially into her country. (Germany has already accommodated 1.1 million of them in 2015 alone.)

Per the New York Times,

Senior government officials will now huddle to come up with a response. Either way Ms. Merkel turns is fraught with peril.

“If she decides… that Mr. Böhmermann has exercised his right to satire,” Bernhard Pörksen, a media expert at the University of Tübingen, “she risks offending a highly sensitive president who is trampling press freedom in his own country. But if she authorizes a court prosecution, there will be a powerful outcry inside Germany. It will be seen as a gesture of submission to the Turkish president.”

No doubt Erdoğan would like few things more than to see Merkel submit.

April 12, 2016
Christian Films Are Really Awful, Aren't They?
Next Post