Watch: Saudi-Arabia’s Top Soccer Goalie Had To Get an Impromptu Pro-Islam Haircut on the Sideline April 11, 2016 Terry Firma

Watch: Saudi-Arabia’s Top Soccer Goalie Had To Get an Impromptu Pro-Islam Haircut on the Sideline

Waleed Abdullah is a world-class soccer player who has for years defended the goal of Saudi Arabia’s national team. That record of service wasn’t quite enough for Saudi soccer officials at a home match in Riyadh, however. Abdullah was kept from entering the pitch due to his unacceptable haircut.

Almost invisible in the videos I’ve watched of the incident, he apparently sported the tiniest mohawk. Allah disapproves, Abdullah was told, and so two hastily summoned men with scissors set to work on the goalie’s hair, removing fractions of an inch (if that) of his already stubbly growth. 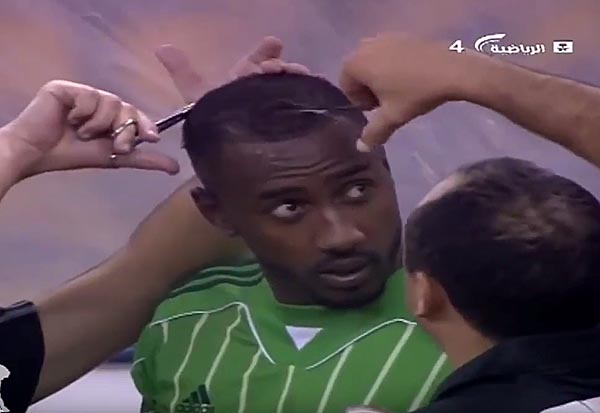 To cut down further on follical freestylin’, Saudi Arabia’s youth federation is now

… asking football clubs and the Olympic committee to “ban the qazaa phenomenon,” using the Arabic term for eccentric hairstyles worn by athletes, according to Arabic sports website Arriyadiyah.

One commentator, writing in the Saudi newspaper Al-Jazirah on Friday, urged the football federation to “impose sanctions” on players whose “bizarre haircuts are imitated by their fans in schools.”

It must be wonderful to be a professional busybody, especially if you get to claim you have a direct line to Allah (PBJ LOL GTFO).

[This story was edited after publication to clarify timelines and correct an error. The haircutting incident involving Abdullah took place in 2012, not “recently.” — TF]

April 11, 2016
More Republican Politicians Than Trans People Have Been Arrested For Sex Acts in Bathrooms
Next Post