Here’s How Religion Contributes to the Wage Gap

When politicians and pundits say women make 77 cents for every dollar a man makes, it’s usually a prelude to the “equal pay for equal work” argument. That’s a fine goal, of course, but the statistic is misleading. The problem isn’t that women and men get paid different amounts for the same work, but that a variety of forces lead women and men to take different jobs with very different salaries.

According to a working paper by Travis Wiseman (Mississippi State University) and Nabamita Dutta (University of Wisconsin, La Crosse), religion is one of the main factors shaping that wage gap. 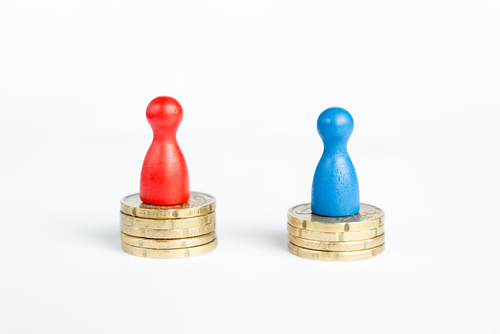 What they found is that if a state’s religiosity is increased by 1%, its wage gap widens by 0.3%.

Traditional religious attitudes might also affect employer behavior, shaping managers’ decisions about whom to hire or lay off, or a family’s decision about who should be the primary breadwinner. Zooming out, the state government’s distribution of resources — like education, health care, and parental leave — can also be shaped by prevailing cultural norms that are shaped by religious attitudes.

To put it at the extremes, if your state is full of Duggar-like families where women are expected to be homemakers or housewives, odds are you won’t see very many high-salaried female CEOs. At least not as many as you would in another state where religion was mostly an afterthought.

Religion isn’t the only factor widening the wage gap — or even the most important one, necessarily — but it’s one that doesn’t get mentioned much. And it should be, since this isn’t a problem that can be fixed through legislation. There’s no bill Congress could pass that could force conservative religious communities to give women better access to higher-paying jobs or compel women to choose higher-paying careers. That’s a cultural change that has to happen from within.

April 11, 2016
The Tip That Led to Terrorist Abdelhamid Abaaoud's Downfall Came From a Muslim Woman
Next Post

April 11, 2016 No, Bill Nye is Not Debating Sarah Palin on Climate Change
Browse Our Archives
What Are Your Thoughts?leave a comment