I Wonder If Glenn Greenwald or Ben Affleck Will Tell This Saudi Journalist She’s “Gross” and “Racist” April 10, 2016 Terry Firma

Saudi journalist and TV host Nadine Al-Budair, who operates out of Qatar, is becoming a viral sensation in her homeland and abroad, thanks to a three-minute editorial tirade she gave on air a week ago. Far from pretending that terrorist attacks on soft Western targets have nothing to do with Islam, as we’ve heard so often from that faith’s reflexive defenders, Al-Budair lit up the screen by arguing the opposite: 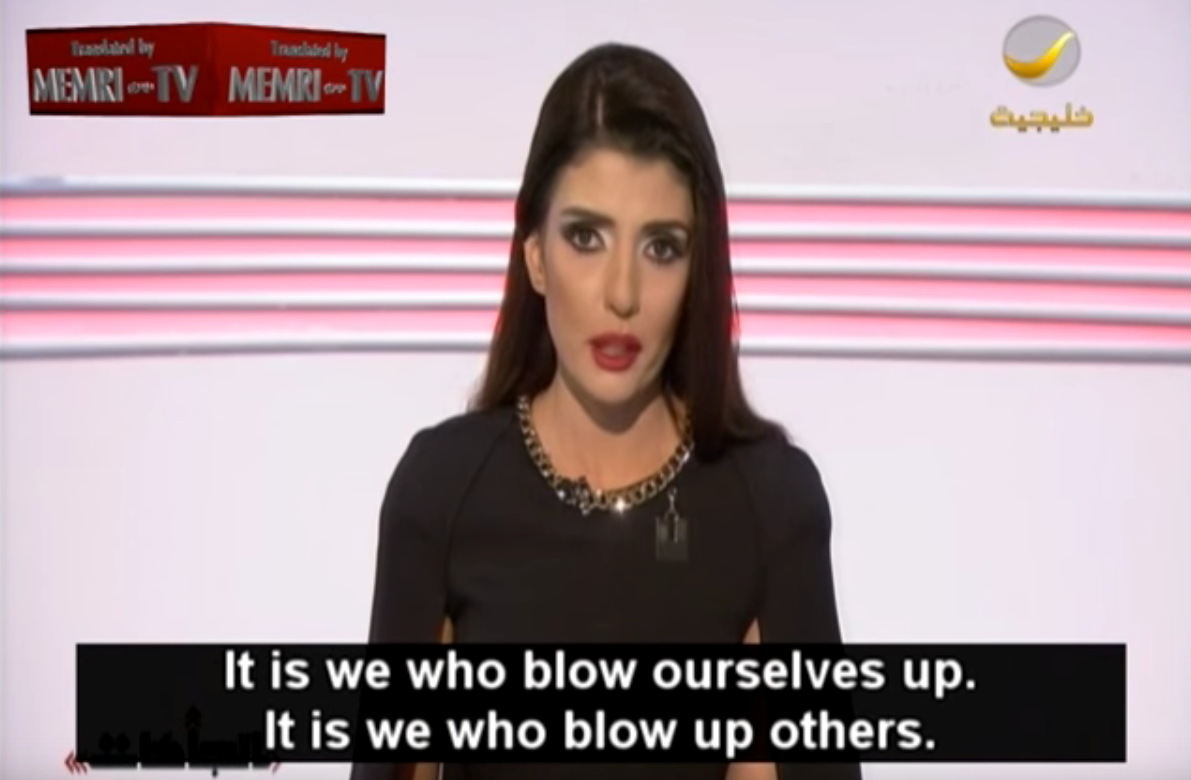 “Whenever terrorism murders peaceful civilians, the smart- alecks and the hypocrites vie with one another in saying that these people do not represent Islam or the Muslims. Perhaps one of them could tell us who does represent Islam and Muslims.”

She points out that it’s not random Muslim highway robbers or drug addicts who bomb people to smithereens, as some Arab media have claimed in all seriousness.

After the abominable Brussels bombings, it’s time for us to feel shame and stop acting as if the terrorists are a rarity. We must admit that they are present everywhere, that their nationality is Arab, and that they adhere to the religion of Islam. We must acknowledge that we are the ones who gave birth to them, and that we have made them memorize all the teachings of the Salafi books. We must admit that it is the schools and universities we established that told them the others are infidels. We must admit that we all — the different sects and faiths, the Sunnis and the Shia — adhere to one school and one school only: the “freezing of the mind” school. Don’t ask! Don’t think! Don’t resist orders! Welcome to the Arab Mashriq. …

Why don’t [the sheikhs] have the courage to declare that they are the ones who said that jihad is obligatory, and who legalized political wars, using futile and disgraceful exegeses which permit killing, enslavement, and destruction?”

It is pretty much the same point made by white guys like Sam Harris and Bill Maher, but when they do it, much of the regressive left spits them out and calls them “racist” and “gross” (I’m looking at you, Ben Affleck). I wonder if that same cross-section of ersatz progressives will call the brave Saudi journalist the same names.

Anyway, Al-Budair is on a roll. Days earlier, she published an editorial in Kuwait’s Al-Rai newspaper arguing that Arab countries have failed to make strides toward creating a comparatively open, equality-based society like the ones that are now common in the West. And she asked Muslim readers to consider what would have happened if the events of 9/11 had gone the other way — if freelance Christian terrorists had attacked civilian targets in an Islamic country, and killed thousands.

“Imagine a Western youth coming here and carrying out a suicide mission in one of our public squares in the name of the Cross. Imagine that two skyscrapers had collapsed in some Arab capital, and that an extremist Christian group, donning millennium-old garb, had emerged to take responsibility for the event, while stressing its determination to revive Christian teachings.”

It’s a cool thought experiment, but we know that that kind of aggression really only goes the other way; and I’m glad that even in the Muslim world, real liberals like Nadine Al-Budair get to point that out.

April 10, 2016
Duck Dynasty Dad Opens NASCAR Race with Prayer That We "Put a Jesus Man in the White House"
Next Post