By now, you’ve probably seen the video of a woman in a Starbucks berating Florida Governor Rick Scott, who stopped by for a drink but ran the hell out of there (along with his entourage) once he realized how bad this all looked: 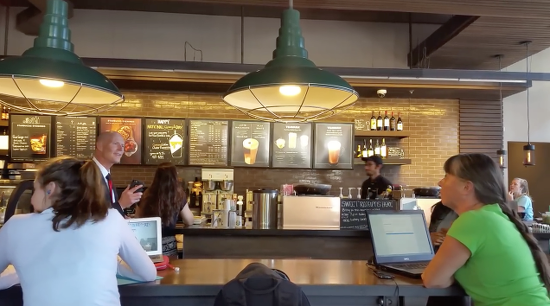 WOMAN: … you cut medicaid, so I couldn’t get Obamacare. You’re an asshole! You don’t care about working people!… You should be ashamed to show your face around here.

SCOTT: Oh, really? Because we’ve got a million jobs…

The video went viral for all the right reasons — an angry citizen unleashing on a conservative governor whose policies have hurt so many people in his state.

A smarter leader would have issued some statement about how his policies have helped the state, contrary to what she said.

A savvy leader would have invited that woman to his office to have a face-to-face conversation — it wouldn’t have changed her mind, but it would’ve gotten Scott some great PR, especially if she said no to the opportunity.

A wiser leader would have just moved on since the critics are always going to be there.

But Scott, who endorsed Donald Trump a couple of weeks ago, isn’t smart, savvy, or wise. And he showed his Trumpian thin skin by making an attack ad against that woman.

Scott’s political action committee released a one-minute YouTube video denouncing Cara Jennings, who used to be a councilwoman in the city of Lake Worth, by saying she’s an anarchist and didn’t recite the Pledge of Allegiance.

As if that’s a bad thing. 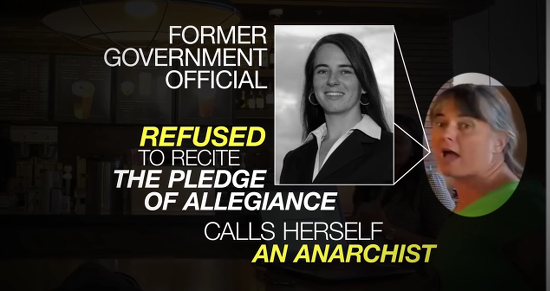 VOICEOVER: You may have seen this video of a terribly rude woman at a coffee shop cursing and screaming at Governor Scott.

JENNINGS: You’re an asshole, you don’t care about working people… A million jobs? Great! Who here has a great job?

VOICEOVER: Well, that woman clearly has a problem. And it turns out that she’s a former government official who refused to recite the Pledge of Allegiance and calls herself an anarchist. But never mind about that. Let’s look at the substance of her question about “Who around here has a job?” I’m glad you asked. She was at Starbucks in Gainesville. So let’s look at who around her has a job. Since Rick Scott became governor, 9,300 new jobs have been added all in this area. In fact, unemployment here was cut in half.

JENNINGS: A million jobs? Great! Who here has a great job?

VOICEOVER: Well, almost everybody. Except those who are sitting around coffee shops, demanding public assistance, surfing the internet, and cursing at customers who come in.

How petty a governor do you have to be to make an ad criticizing a citizen who disagrees with you? How little respect must you have for the Constitution to condemn someone for exercising her First Amendment right not to say the Pledge?

It’s incredible that this is what Scott chooses to do with his power — and it gives us a glimpse of what a Trump presidency would look like, doesn’t it? Criticize him at your own risk.

Jennings is actually a fascinating person. According to a Palm Beach Post profile of her from 2010:

[Jennings] created a labor center out of dilapidated shuffleboard courts at the center of town at the risk of being called an apologist for undocumented immigrants. [Jennings] gave up her job teaching life skills to at-risk high school students to live solely on her $14,000-a-year commissioner’s salary, growing her own food, keeping her own beehives, so she could really do the job of representing the city.

“If I’m maligned for trying to be more understanding to those in need, for being compassionate, then so be it,” Jennings said. “I believe my job is to represent all the residents of this city.”

That’s incredible. If only more people were willing to sacrifice so much to help other people.

Jennings may be a self-described “anarchist,” but she’s one who (ironically) ran for public office. Maybe she’s a “Democratic Anarchist“…?

As for why she doesn’t say the Pledge, she didn’t say whether it was because of the “Under God” bit, or because she doesn’t want to pledge allegiance to a nation whose policies she often disagrees with, or because she knows we don’t really have “justice for all.”

But she doesn’t need a reason. She didn’t want to say it. That’s good enough. It’s not a big deal and it certainly doesn’t mean she’s not patriotic.

Asked why she doesn’t [say the Pledge], Jennings chooses her words carefully.

“My intention is not to be disrespectful, and I give reverence to that tradition,” she said. “I clearly pledge my allegiance to the people for whom I work.”

That a damn good answer. Even if you don’t like her politics, you have to respect the fact that she tried to make her community a better place, as she saw fit.

Rick Scott didn’t even bother criticizing her policies. He went after two of the most inconsequential things about her — just to get the public on his side instead of hers.

Let’s hope it backfires. Because the attack against her is one that could have been made against a hell of a lot of atheists.