Zack Ford and Jack Jenkins went to see God’s Not Dead 2 the other night. I assumed they both lost a bet, though they assured me that wasn’t the case. They just wanted to see what all the hype was about.

Afterwards, they talked about the film and shared their conversation on ThinkProgress: 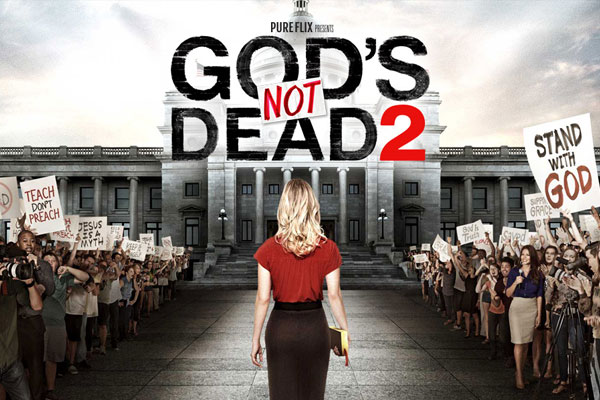 JJ: Actually, I want to talk about the film’s weird obsession with angry atheists. From start to finish, the entire movie is split into two concrete binary categories: people who believe in God and are thus naturally evangelical Christians, or atheists who are corrupt, unhappy, and quite literally hate evangelical Christians. The one exception is Grace’s dashing, J Crew gingham shirt-wearing lawyer (Jesse Metcalf), who is heavily implied to be a newly-converted evangelical Christian by the end of the film.

ZF: After originally being apathetic about religion and uninspired by Grace’s case, we see him at the end of the film reading Man, Myth, Messiah by Rice Broocks, who is one of the film’s several evangelicals who portray themselves as expert witnesses on Jesus.

JJ: Yeah, see, the weird thing here is that the courtroom drama eventually devolves into a debate over whether or not Jesus was an actual historical figure — an argument that is completely unnecessary to win Grace’s case, since she doesn’t need to prove whether Jesus existed in the literal sense to contend that Christianity and the Bible were directly relevant to the activism of Martin Luther King, Jr. (I don’t think anyone would dispute that it was).

ZF: I would think not! But that didn’t stop the evil atheist teacher from proudly testifying that if she taught “Letter from a Birmingham Jail,” she’d leave out King’s biblical references, because ew. Icky.

It’s a wonder they made it through the entire film without storming out of the theater in disgust.

Still, you should read the whole conversation. You get a strong sense of what the movie is about and how much the filmmakers had to exaggerate atheists in order to create their evil villains.

April 9, 2016
Trooper Fired for Proselytizing On the Job Gets Public Support: "I Wish Other Officers Would Do That!"
Next Post