Texas Police Dept. Uses Facebook Survey to Validate Putting “In God We Trust” on All Vehicles

You know, usually, if a police department wants to put “In God We Trust” on the vehicles, the chief just makes it happen. The Madisonville Police Department in Texas, however, put it to a vote on Facebook.

I wonder what the people of Texas said… 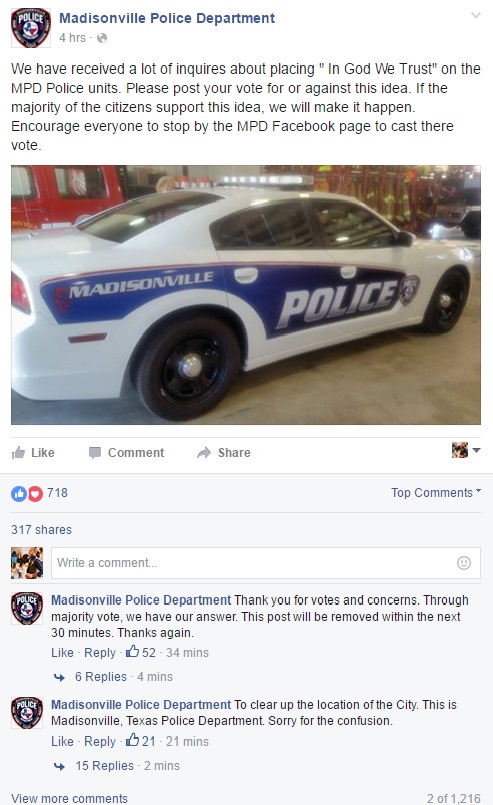 The post received over 700 likes, more than 1,200 comments and over 300 shares — most of which were in support of the idea. Before deleting the post, the agency commented, “through a majority vote, we have our answer.”

They deleted the post… as if it would hide the evidence or something.

Look: There’s no doubt this phrase is a promotion of religion. It shouldn’t be plastered on government property because of the Establishment Clause, though courts have generally let it slide. But putting it to a vote is nothing but the department’s way of saying, “Don’t sue us over this. We didn’t decide it. The people did.” They knew damn well how this would play out.

On a brighter note, if you get a speeding ticket, let’s hope there’s someone in your passenger seat. You’ll outnumber the cop who catches you and drive away without punishment!