Texas Attorney General Ken Paxton is, as you might expect, no friend to progressives. But it’s still incredible how much he’s going out of his way to make conservative Christianity the de facto law in his state. 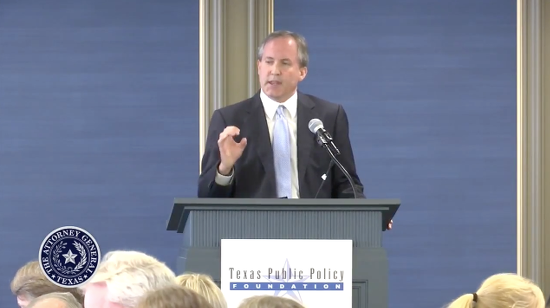 Last month, when Paxton had to appoint a new First Assistant Attorney General because the last one ran off to run a Ted Cruz Super-PAC, he turned to Jeff Mateer, who used to work at First Liberty Institute (formerly known as Liberty Institute), the conservative legal defense group.

Mateer said in a 2013 speech that the notion of church/state separation was essentially a hoax.

So what’s Paxton doing for his next trick?

He just appointed a chief of staff. And guess where this one came from?

Hiram Sasser, a top litigator at the conservative nonprofit law firm the Liberty Institute, will serve as Attorney General Ken Paxton’s chief of staff for at least the next 90 days.

Sasser, a former commander in the U.S. Army Reserve, has practiced before state and federal courts, often acting as the attorney for students who want to express their faith in public schools.

Sasser was last seen defending the Washington football coach who wouldn’t stop praying on the field after games, and saying that a public elementary school’s plaque that read “Dedicated in the year of our Lord 1997 to the education of God’s children and to their faithful teachers in the name of the Holy Christian Church” was absolutely fine.

It’s the second hire from the same conservative Christian legal defense group. Paxton is basically creating his own state-run firm to advance faith-based causes. These are all people who think the Bible has more to say about how we should run our country than the Constitution, and it spells disaster for women, LGBT people, religious minorities, and anyone else in Texas who don’t subscribe to evangelical Christian beliefs.

April 7, 2016
Oklahoma is a Step Closer to Putting an Illegal Ten Commandments Monument on Capitol Grounds
Next Post