I’ve written before about the dangers of the extreme rhetoric and outright lies the right-wing employs in its anti-abortion efforts. New data detailing a dramatic increase in anti-abortion violence and threats — coinciding with the release of the discredited “baby parts” Planned Parenthood videos — lends credence to the idea. And while correlation isn’t causation, it’s not much of a stretch to think that insisting that doctors are murderers and organ traffickers might inspire something less than good will. 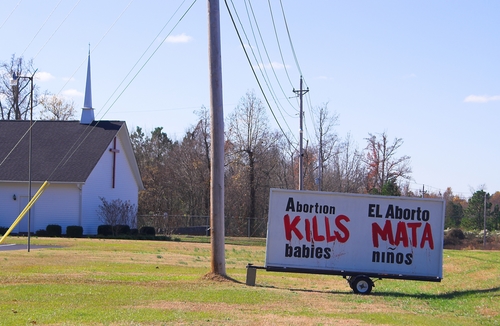 The National Abortion Federation (NAF), which has tracked anti-abortion violence for the past four decades, released a document detailing the uptick in violent activity and speech in 2015, and their findings are jarring:

Our 2015 statistics reflect a dramatic increase in hate speech and internet harassment, death threats, attempted murder, and murder, which coincided with the release of heavily-edited, misleading, and inflammatory videos beginning in July.

After each video, social media, blogs, and news websites were filled with inflammatory comments about the doctors who were misrepresented in the videos, including that they were “evil,” “vile,” “inhuman,” “murderers,” and that abortion providers “deserve everything they have coming” to them.

The online hate speech took many forms, including clear threats of harm to individuals. After the CEO of a tissue procurement organization was featured in one of the inflammatory videos, an individual leveled death threats against her online. He stated that the CEO “is a deathprofiteer” and “should be hung by the neck using piano wire and propped up on the lawn in front of the building. . .” The person went on to identify where the CEO lived and stated: “I’m going there… I’ll pay ten grand to whomever beats me to [CEO]… [CEO] must die…” The same individual offered a reward online for the murder of a doctor, posting, “I’ll pay ten large to whomever kills [Doctor]. Anyone. Go for it.” Both of these targeted individuals had to employ extensive security measures to protect themselves as a result of these postings. NAF uncovered and provided these threats to the Department of Justice (DOJ). The FBI investigated, and the individual who made the threats was arrested and is now being prosecuted.

The number of reported death threats increased dramatically from one in 2014 to 94 threats of direct harm in 2015. Following the videos, one member received a voicemail that said someone planned to, “…pull a Columbine and wipe everyone out…” and an unknown male called a hospital switchboard in North Carolina saying, “We will kill all [hospital] abortion doctors…”

It wasn’t just threats, though. Abortion clinics were targeted for violence, ranging from the murderous attack on a Colorado Planned Parenthood, that left three people dead, to property attacks.

Within three months of that post, according to NAF’s report, clinics in Washington, Louisiana, California, and Illinois were victims of arson. A clinic in New Hampshire was damaged when someone broke into the clinic and used a hatchet to destroy equipment, exam rooms, computers, phones, and plumbing fixtures, which flooded the clinic.

Not that it’s likely to impact the discussion, of course. Why, after all, would the “pro-life” community let a concern for actual people get in the way of scoring political points for fetuses? It’s never made much difference before.

April 7, 2016
Pakistani Fundamentalists Are Fighting For the Right of Men to Kill Daughters and Wives
Next Post