Muslim Killer Has No Ill Will Towards Christianity — But That Filthy Blasphemer Had To Die April 7, 2016 Terry Firma

Christians can rest easier after the Islamist killer of Glasgow shopkeeper Asad Shah, 40, issued a statement through his lawyer yesterday. Murderer Tanveer Ahmed, 32, refuted speculation that Shah’s gentleness and respect towards Christianity was the reason for the Good Friday bloodbath.

So what made Ahmed butcher Shah? The BBC says that

Mr. Ahmed claimed Asad Shah had “disrespected” Islam by claiming to be a prophet. In the statement, he denied the incident had anything to do with Christianity.

Well, that’s all right then. 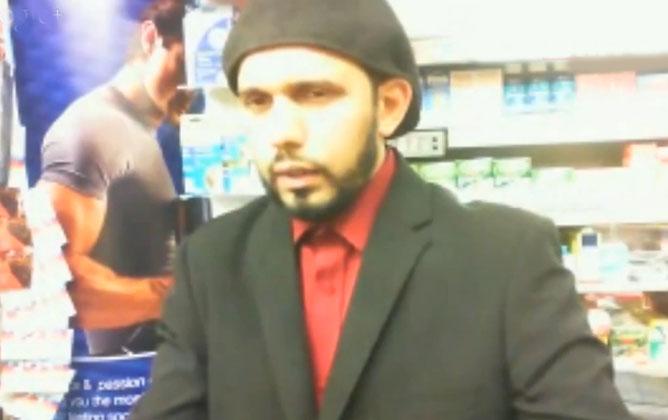 Almost two weeks ago, Shah (pictured above) was found outside his shop with 30 stab wounds and a cracked skull, only about four hours after giving a loving Facebook shoutout to Scotland and its Christians:

“Good Friday and a very happy Easter, especially to my beloved Christian nation.”

As I wrote last week, Shah was an Ahmadi Muslim. The Islamic splinter group puts a high value on living peacefully, in words as well as deeds. Ahmadis tend to have ecumenical leanings, but they are reviled by many Sunni Muslims for a “heretical” interpretation of the Qur’an.

Pakistan, where Shah was originally from, has officially declared Ahmadis non-Muslims, and there have been multiple instances of them being beaten or jailed for even possessing a Qur’an. Some mullahs make promises of heavenly delights to any Muslim who murders an Ahmadi.

Here’s the statement read by Tanveer Ahmed’s lawyer, in his client’s words:

“This all happened for one reason and no other issues and no other intentions. Asad Shah disrespected the messenger of Islam the Prophet Muhammad peace be upon him (PBUH). Mr. Shah claimed to be a Prophet. When 1,400 years ago the Prophet of Islam Muhammad PBUH has clearly said that ‘I am the final messenger of Allah there is no more prophets or messengers from God Allah after me. I am leaving you the final Qur’an.’

There is no changes. It is the final book of Allah and this is the final completion of Islam. There is no more changes to it and no one has the right to claim to be a Prophet or to change the Qur’an or change Islam. …

I wish to make it clear that the incident was nothing at all to do with Christianity or any other religious beliefs (and) even although I am a follower of the Prophet Muhammad PBUH I also love and respect Jesus Christ.”

Yes, he’s quite the Christian ally.

The most eye-popping line in Ahmed’s ramblings is this:

If I had not done this others would and there would have been more killing and violence in the world.

See? He’s not so bad! He scored a net win for peace and harmony!

I want to scream right now.

(Screenshot via the Mirror)

April 7, 2016
Bangladeshi Official, in Response to Murdered Atheist, Will Investigate His Blog for Offensive Posts
Next Post