Fearing His Return to Malaysia, a Gay Atheist Student Has Been Granted Refugee Status in Canada April 7, 2016 Hemant Mehta

Fearing His Return to Malaysia, a Gay Atheist Student Has Been Granted Refugee Status in Canada

Hazim Ismail is a student at the University of Winnipeg who was planning on returning to his home country of Malaysia once he graduated. The problem is that he’s gay and an atheist… neither of which would go over so well over there.

But an Immigration and Refugee Board of Canada panel has just approved his claim for refugee status, allowing him to stay in Canada indefinitely. 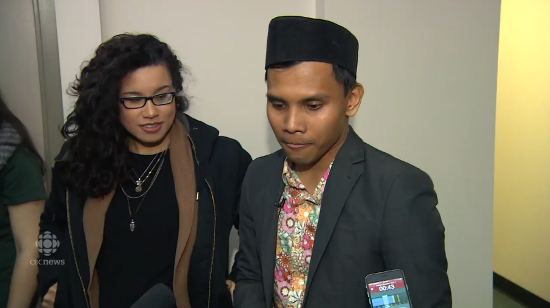 Ismail said he was still trying to process the decision, which came after months of preparations and anxiety about possibly having to return to Malaysia, where homosexuality is punishable by law and 60 per cent of the population is Muslim.

Ismail said his family, who are Muslim, disowned him and stopped paying for his education last year after learning he is gay and an atheist. His story became public after a GoFundMe campaign was launched in December to help pay his tuition for the rest of his semester.

He said he once thought of returning to Malaysia and trying to live undercover there, but his case has since attracted media attention in his home country, along with homophobic comments and even threats from some members of the public there.

Going back home meant living in fear the rest of his life. Now, he’ll have the chance to become a Canadian citizen and not have to look over his shoulder all the time simply because of who he is and what he believes.

It’s a wonderful ending to what could have been a disaster.

April 7, 2016
If Donald Trump Needs a Cheat Sheet for How to Talk About Abortion, Here It Is
Next Post

April 7, 2016 Once Again, Atheists Sue Federal Government Over Tax-Free Housing for Pastors
Browse Our Archives
What Are Your Thoughts?leave a comment