Earlier this year, Christian apologist and scandal magnet Dinesh D’Souza spoke at a church in Florida about the “New Atheists.”

So you knew this was going to be a disaster. 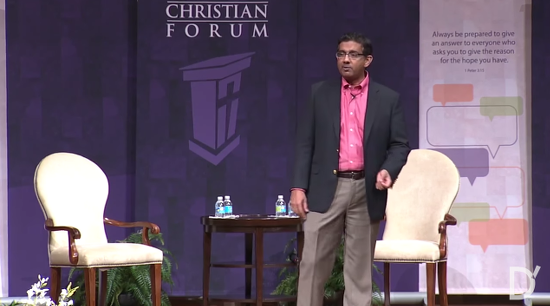 D’Souza begins by saying the New Atheists are more like “evangelical atheists” because they want “converts,” whatever that means.

The fact is that anyone who’s passionate about any cause wants people to agree with them. People like Richard Dawkins are no different. He’ll put forth his case for why God doesn’t exist, hoping that you’ll find his explanation persuasive, and that’s it. He doesn’t want you to give him money or treat him like a God.

There’s absolutely nothing wrong with trying to convince people you’re right. Everyone does it.

But when atheists do it, D’Souza freaks out.

He also mocks the idea that atheists are now so vocal about this topic. To him, that makes us “missionary atheists.”

… If they were just [regular] unbelievers, then you would think they wouldn’t bother too much about it. Why write books like The God Delusion? God is Not Great? If they didn’t believe in God, if they thought God was a myth, it would be similar to you or I believing that unicorns are a myth. But you’ll notice that we don’t go around writing books called Unicorns Are Not Great. The Unicorn Delusion. We don’t spend a lot of our time thinking about unicorns. We just kind of let ’em be. But these guys are just as obsessed about God as any of us in this audience…

Do I really have to explain this again?

Belief in God matters — and we have an obligation to debunk it — because that belief leads to policies that affect all of us. If you care about the rights of LGBT people, women, scientific research, sex education, climate change, and so much more, then you know damn well that conservative Christians have blocked progress on all of those fronts because they believe God is guiding them in a different direction.

No one’s killing abortion doctors or blowing up buildings in the name of unicorns.

It’s amazing that he doesn’t understand that difference. (More likely, he does, but he’s speaking to a crowd that prefers ignorance and he’ll do anything for their attention.)

And then D’Souza makes the worst claim of all.

After telling the audience that he knows a lot of New Atheists personally, he says that only a handful of them really buy into their reasons for why God doesn’t exist.

The rest of them — the “majority,” he says — really don’t care. D’Souza calls them “wounded theists”:

… What I mean by that is that it’s not that they don’t believe in God, they hate God. They actually have a beef with God. And their atheism, if you will, is a form of intellectual and spiritual revenge.

Riiiiiight. Said like someone who’s apparently debated a bunch of atheists yet never spoken to any of them.

I know a lot of passionate atheists. Not a single one I’ve ever met talks about this subject because they hate God. They genuinely don’t believe one exists, they’ve seen the harm caused by that belief, and they want to help people avoid a life of fear and nonsense.

It’s no surprise that D’Souza would say this, though, because he travels primarily in conservative Christian circles. He’s inside the same persecution bubble that facts can’t penetrate. They all tend to believe this myth that the most vocal atheists have a God-shaped hole in our hearts that we’re looking to fill.

When you hear all this, it’s a wonder that anyone takes D’Souza seriously. He lies constantly, repeats those lies to people who’ll believe anything you tell them as long as it supports their persecution narrative, and cashes in on their gullibility. There’s no incentive for D’Souza to tell the truth when he has so much to gain by spreading bullshit.