Years Later, the Cheerleaders Who Hoisted Bible Banners Are Still Part of an Ongoing Legal Debate

The story of the Kountze High School cheerleaders began in 2012 and still hasn’t ended, even though the students in question have almost all graduated.

If you need a quick refresher, these are the Texas cheerleaders who held up banners with Bible verses on them during football games. Critics argued that, since the cheerleaders were representing the school, they couldn’t promote religion while on the field. 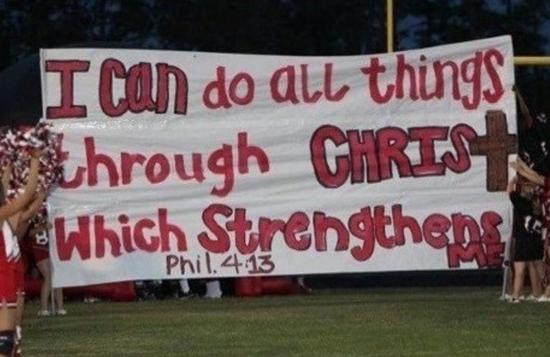 I won’t rehash everything since it’s so convoluted, but you can read a longer version right here.

In any case, Emma Green, writing for The Atlantic, caught up with some of the cheerleaders to get their impressions of the case years later and to show how “religious freedom” battles aren’t limited to LGBT issues:

More religious diversity means more fights about how one group’s rights should stack up against another’s. Confronted with a challenge to their faith, at least a couple of the cheerleaders seem to have ended up in a place of deeper conviction than before; even as their peers slowly drift away from religion, this experience has helped these young women rearticulate and reaffirm what they believe.

Maybe the saddest part about this whole story is the fact that the Freedom From Religion Foundation, which raised the initial concerns about the promotion of Christianity, couldn’t find a plaintiff to file a lawsuit:

“I can never have anticipated a violation this absurd and this overt, and that we would have this kind of fight on our hands,” said Annie Laurie Gaylor, the head of the FFRF. “The cheerleaders are trying to say this is free speech, but it ain’t, because they’re selected by the school, and they represent the school.” So far, the organization has been unable to find a person in the community who is willing to bring a countersuit against the cheerleaders, which they’d need in order to have standing, or the right to bring a case.

It’s not surprising. I can’t imagine any student would relish the idea of being the voice of reason in a District full of privileged Christians. That student would immediately become the target of harassment. We saw it with Jessica Ahlquist in Rhode Island; it’d undoubtedly be worse in Texas.

There was a backhanded criticism of FFRF that deserves a response, though:

Although FFRF sent out 1,186 letters to school districts, sheriff’s offices, and other government bodies last year, it only won or settled five litigated cases, Gaylor said. Right now, it has nine pending lawsuits, with a few more on the way. FFRF places a particular focus on schools. These letters are intended to have exactly the effect they had in Kountze: to scare school districts with the threat of a lawsuit and get them to take action and cease alleged violations of the First Amendment.

FFRF may have won or settled five cases — which seems small given how many letters they send out — but there’s a reason for that which wasn’t given in the article. FFRF doesn’t want to be involved in lawsuits if they can help it. They would much rather school districts, city councils, etc. fix the problem as soon as they get the letter. It usually gets resolved that way.

Lawsuits are only filed when FFRF can’t resolve an issue through the complaint letters, when the fight seems like one they can win in court (based on where it’s taking place and how much evidence is available), and when they have a plaintiff with legal standing. It’s not often all three of those things happen at the same time, and part of the reason is that it’s hard to find young plaintiffs (in school cases) who have both parental support and the courage to stand up against everyone in their communities.

I’ve seen FFRF called “litigious” in many articles. That word isn’t in this article, but it’s certainly implied by the critics quoted in the piece. FFRF isn’t fighting these battles because they get a kick out of “scaring” Christians. They do it because they know what illegal promotion of religion looks like in practice. And if they don’t try to put a stop to it, who will?

April 6, 2016
Another Atheist Hacked to Death by Radical Muslims in Bangladesh
Next Post