It’s amazing how Ted Cruz can claim Christians are being persecuted in the U.S. when he’s ridiculously close to winning the presidency.

Televangelist Jim Bakker is no different. On his show last week, he explained to the Family Research Council’s Jerry Boykin that Christians are under attack so badly, that he’s practically waiting for the government to arrest him. 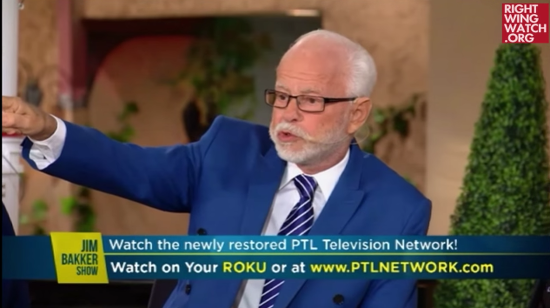 … We’ve lost prayer, we’ve lost Bible reading, we’ve lost just about everything. It’s so that we can’t even preach the very foundations of the word of God… And if [the government] stormed in these doors right now and arrested me, I would not be surprised.

To quote Right Wing Watch’s Kyle Mantyla, Bakker said this “despite the fact that he happens to host a television show where he prays, preaches and reads the Bible every single day.”

No one’s going after preachers or TV hosts or private citizens who want to pray. The only problem is (and always has been) when government officials decide to use their position to promote their faith. That needs to stop.

And unless he becomes “Senator Jim Bakker,” it’s not a problem he’ll have to worry about anytime soon.

April 6, 2016
Swiss People Are Furious That Two Muslims Boys Won't Have to Shake Their Female Teachers' Hands
Next Post