In a Madison, Wisconsin town hall hosted by Fox News Channel’s Megyn Kelly, Ted Cruz fielded questions from Kelly and audience members. One self-described moderate, pro-choice Republican woman voiced her concerns that Cruz would ban abortion. As usual when asked a potentially risky question, Cruz employed a combination of duplicity and outright dishonesty in his answer. 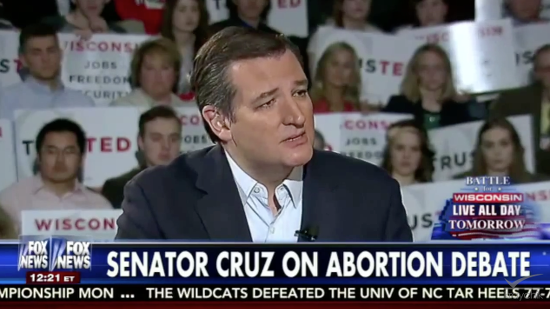 Cruz, who is being supported by the National Right-to-Life anti-abortion group for his “100% pro-life voting record,” declared that Roe v Wade was just “judicial activism” rather than settled law of the land. Aside from the fact that SCOTUS rulings do, in fact, settle the questions they’re asked to answer, Right Wing Watch’s Peter Montgomery notes that Cruz’s position is certainly not one of leaving the issue to the states. He’s an active opponent of women’s rights:

Cruz then engaged in a bit of disingenuous rhetorical misdirection, saying that if Roe v. Wade were not the law of the land, questions about abortion and exceptions “would be up to the people of Wisconsin to decide.” But of course Cruz doesn’t really want decisions about abortion being made at the state level as they were before Roe v. Wade. He has publicly supported a constitutional amendment to ban abortion nationwide. And he doesn’t really even think a constitutional amendment is necessary. He said a few months ago that Congress could “absolutely” get around Roe v. Wade just by passing a law declaring that fertilized eggs have all the legal rights of people under the 14th Amendment. That would not only criminalize all abortion nationwide but would almost certainly make some forms of birth control illegal and leave women open to prosecution for miscarriages deemed suspicious by local authorities.

Kelly didn’t delve into this amount of detail, but she did note that…

… many women would have a problem supporting Cruz because he did not favor an exception for rape.

“They think you may be too far right on social issues,” she explained to the candidate.

“Rape is a horrific crime against the humanity of a person,” Cruz admitted. “But at the same time, as horrible as the crime is, I don’t believe it’s the child’s fault.”

“We want to do every thing we can do to prevent the crime on the front end and to punish the criminal,” he added. “But I don’t believe it makes sense to blame the child.”

Kelly pushed back: “They say you would be forcing the mother to go through unspeakable trauma to carry her rapist baby for nine months.”

Cruz, however, did not answer the question directly, and argued that the decision would be left up to the states.

Again, this is pretty standard fare for Cruz: dodge if possible, lie where needed, and lay the platitudes on thick.

But once you get through the faux compassion, Cruz’s position of forcing a rape victim to carry her rapist’s child is anything but compassionate. Instead of owning his position directly, however, he pivots to the innocence of the fetus and how it shouldn’t be “blamed” for the rape.

Well, of course. But because the fetus (obviously) isn’t responsible for rape has no bearing on whether or not a woman should be forced to carry her rapist’s fetus for nine months. She shouldn’t have to jeopardize her health, mental or physical, while suffering through an unwanted pregnancy and childbirth.

While he weasels out of it here, deflecting to state’s rights, we’ve already seen that Cruz has previously endorsed moves to ban abortions outright. So make no mistake: Cruz believes the government should compel a woman who has already been raped to have that baby. The moment a rapist’s sperm meets a woman’s egg, her right to bodily autonomy and making her own reproductive choices goes out the window under a Cruz administration.

Not that a “states’ rights” position is much better. Putting women’s bodily autonomy to popular vote is not a compromise. It’s by no means a moderate position.

But lying about his own position wasn’t enough. Cruz also lied when it came to the stance of his biggest competitor:

Cruz said Trump’s comments were the words of a liberal trying to say what conservatives want to hear. He argued that women are victims of abortion, and said no conservative wants to see women punished.

Nonsense. Punishing women is exactly what many pro-lifers want. It’s the only logical outcome of banning abortion — and it’s already happening to women because of “pro-life” legislation in the states.

Maybe the bigger question here is what Cruz is most allergic to: the personhood of women or telling the truth about his positions?

April 6, 2016
New Survey Finds Majority of People in Scotland Have No Religious Affiliation
Next Post