Turkey’s highest religious body, the Diyanet, has decided it’s a good idea to teach children that it’s great to martyr oneself for God and country.

The latest issue of a children’s magazine published by Diyanet [contains] a colorful cartoon titled “May god bless our martyrs, may their graves be full with holy light.” [It] features dialogues between parents and children that promote… religious martyrdom. In one box of the comics, a father says to his son: “How good it is to be a martyr…” He also adds that martyrdom gives a person an opportunity “to gain the right to go to heaven.”

In another box…, a girl can be seen saying “I wish I could be a martyr.” “If you desire enough, Allah will give you that opportunity,” the mother in the box replies to the girl…

Another statement attributed to Prophet Mohammed says: “A martyr would love to go back to the real world and be a martyr 10 times more after the honoring and prestige they receive in the heaven.” 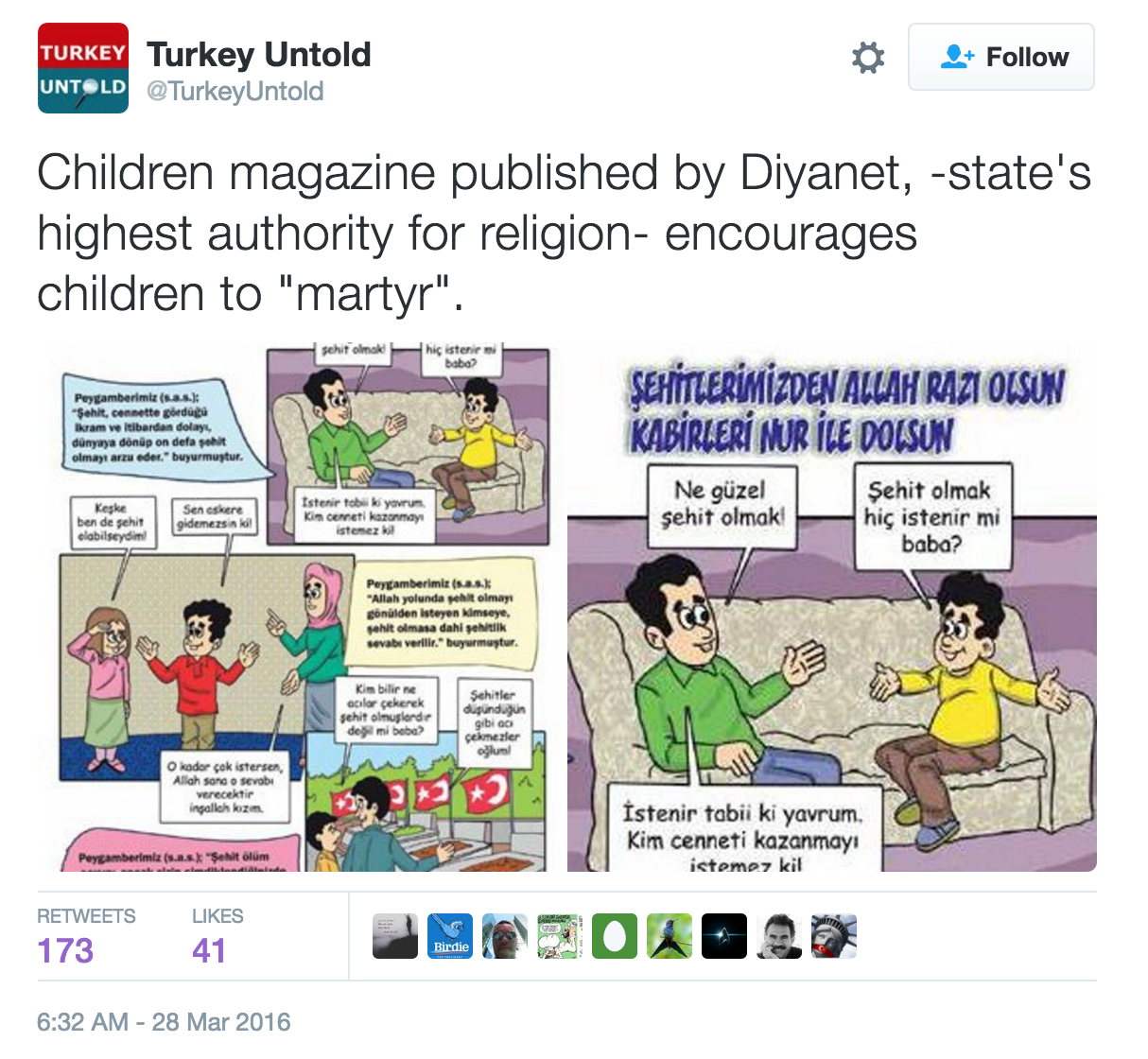 Making this eye-popping attempt at brainwashing even more galling is that the Diyanet is a government agency, one with an annual budget north of 2.5 billion U.S. dollars.

The report comes from RT News, a Russian news outfit whose neutrality is questionable due to its strong ties to the Kremlin. So, mindful of recent territorial skirmishes between Russia and Turkey, I got the Turkish friend of an American colleague to verify the RT translation. He confirmed that the story pans out, and that the comic strip really does tell children that martyrdom is glorious.

One important caveat: the martyrdom the magazine talks about isn’t the kind featuring suicide vests and soft civilian targets. Instead, it’s about dying in battle against enemies like Kurds hostile to Turkey.

Turkey is formally a secular democratic republic but has had an autocratic Islamist leader, President Recep Tayyip Erdoğan, since 2003. Erdoğan, a thin-skinned nanny-stater, isn’t above siccing police and prosecutors on journalists and cartoonists. He also seeks to embed Sunni Islam ever deeper into secular institutions like schools and the military.

However, ISIL fundies see Erdoğan as as a slave to the West and a legitimate target; and some observers think that Turkey, despite Erdoğan’s best efforts and the fact that 98 percent of the population is Muslim, is getting more secular, not less.

If RT’s article is any guide, there are still influential Turks who are hardly cowed by the strongman in Ankara.

Psychologist and professor Dr. Serdar Değirmencioğlu harshly criticized the latest issue of the Diyanet’s [magazine] featuring the controversial comics. … The professor also equated the mentality promoted by such comics with the mentality of those who committed deadly terrorist attacks in Turkish Ankara and Suruç, as well as Brussels and Paris.

“Turkey is overwhelmed with the pain of these massacres and with those pursuing the mentality of religiosity. All this has led to the death of people. Exactly the same mentality that blinds people to the horrors is what the Presidency of Religious Affairs is trying to spread among the children in Turkey. The children will grow up and they will run toward death when those in power tell them to,” he told Evrensel [a Turkish daily].

It is a concern that the same worrisome mentality may now be spreading in the United States. Just last Saturday, Erdoğan inaugurated the snazzy new Diyanet Center of America in Lanham, Maryland. I predict that any talk of Islamic martyrdom emanating from that Diyanet edifice — essentially, a 100-million-dollar mega-mosque — will not go down well with Americans… and with good reason.

P.S.: A final fun fact: In recent months, Turkey has inched closer to its long-time goal of joining the European Union.