Baba Ramdev, a prominent Indian yogi, is no stranger to controversy. He considers same-sex attraction to be scandalous and “against our Vedic culture,” but luckily being gay is nothing that can’t be cured in six months with the right kind of yoga (his kind, coincidentally) and meditation.

He’s also on record as saying that sex education in schools should be replaced by yoga classes, and that AIDS can be a thing of the past thanks to ayurvedic medicine and (you guessed it) more yoga.

Now, the shady swami has achieved a new level of notoriety, by thundering that were it not for India’s pesky law against murder, he’d like to behead people — mostly Muslims, it would seem — who aren’t patriotic enough. Ramdev, you see, thinks the common phrase Bharat Mata Ki Jai — “Hail Goddess India” — should be a mandatory incantation for all Indians. Those who won’t say it should have their heads chopped off. 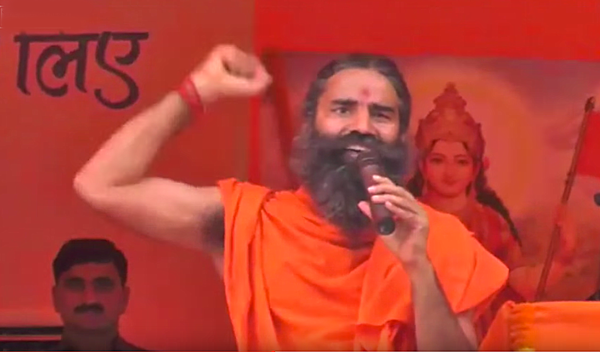 [The line is] widely used as a statement of patriotism by the BJP, India’s Hindu nationalist ruling party. Some politicians have called for all students to be taught the phrase in school. But some Muslim clerics say it goes against the Islamic belief that there is only one God, and they’re trying to stop the phrase being imposed. … One BJP politician [said that] those who refused to hail Mother India, whatever their religion, should have no right to remain in the country.

But last Sunday, Baba Ramdev upped the ante. He spoke at a gathering of the right-wing Hindu group RSS, a function whose ostensible goal was (I shit you not) promoting community harmony. And there,

Ramdev made it very clear that only respect for the rule of law was restraining him from beheading anyone who disrespected Bharat Mata.

“If someone says that he won’t chant Bharat Mata Ki Jai even if his head is chopped off [a reference to a defiant Muslim critic who vowed exactly that — TF], I want to say there is a rule of law and we respect the constitution, otherwise we can cut hundreds and thousands of heads,” Ramdev said in remarks that were filmed and later posted on YouTube.

Ramdev may have broken the law against incitement. Some Indians want him arrested and are calling for law enforcement to open an investigation against him.

“I want to know from those who talk of free speech, does it not apply to Baba Ramdev?“

April 6, 2016
Gwyneth Paltrow's Latest Pseudoscientific Beauty Tip: Get Stung by Bees to Be Beautiful!
Next Post