In late February, the Military Religious Freedom Foundation reported that there was a POW/MIA memorial table at a VA clinic in Akron, Ohio that included a Bible. While the 11 MRFF members who raised the issue obviously had no problem honoring soldiers who were prisoners of war or missing in action, they didn’t understand why the government was promoting Christianity in the process.

It’s not like casualties of war are always Christian. This was just another way of perpetuating the false notion that there are no atheists in foxholes.

MRFF President Mikey Weinstein contacted the clinic on his clients’ behalf and was soon told the Bible was no longer part of the display. 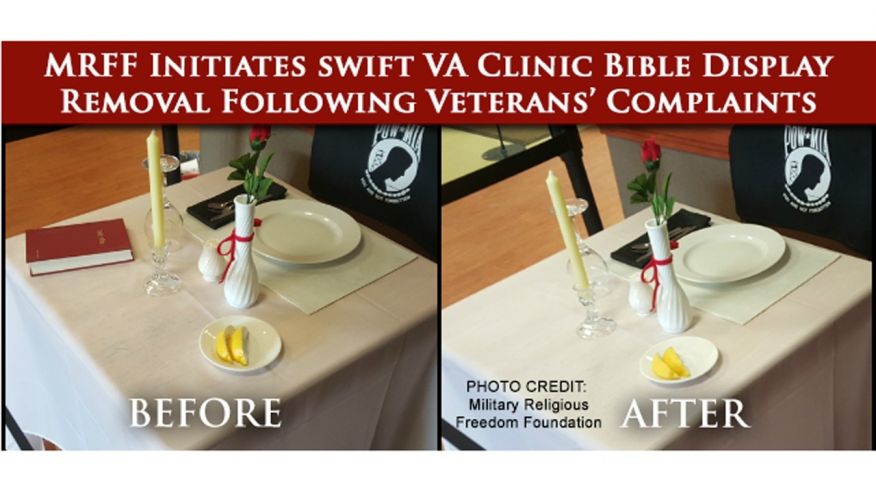 As you can imagine, that set off Todd Starnes, FOX News’ resident Christian Persecution columnist.

It’s not the first time the military has desecrated a Missing Man table. In 2014 a Bible was removed from a display at Patrick Air Force Base in Florida — to make the table more “inclusive.”

And whenever you see the word “inclusive” it normally means Christians are about to get silenced.

“Silenced,” to Starnes, is what the rest of us call “neutrality.” There was no reason for the Bible to be on that table when other religious books were excluded, and Weinstein pointed out that 7 of the 11 MRFF members who contacted him were Christians themselves.

Congressman Doug Collins (R-GA) weighed in as well, wrongly suggesting that MRFF’s actions were all about shutting down Christianity:

“As a Chaplain in the Air Force Reserve, I am appalled to see that an Ohio VA clinic caved to the now familiar antics of the Military Religious Freedom Foundation. This organization has devoted itself to attacking Christians and undermining the religious freedoms guaranteed to our men and women in uniform by the Constitution. That Mikey Weinstein and his organization would call for a Bible to be removed from a POW display is not surprising, but it is another indication that this organization is blind to our country’s founding principles. I call on the Akron VA clinic to immediately replace the Bible and Bible verse to the display. I will not stand by while the MRFF fights a misguided battle to erase religious values from public view.”

Weinstein, in typical Trumpian fashion, called Collins a “worthless sack of bigotry and prejudice,” before adding that he “is to Constitutional freedom of religion knowledge as what dog crap on fine china is to a formal dining.”

War of words aside, let’s say it all together now: Asking the government to not promote Christianity — bringing it down to the same level as all other religious and non-religious beliefs — isn’t a form of persecution. We’ve had atheist soldiers and Jewish soldiers die in battle, too, but you’ll never hear Starnes or Collins suggest we put a Torah or Richard Dawkins book on the table.

Some of the criticism against MRFF points out that the National League of POW/MIA Families — an independent non-profit group — offers guidelines to groups that want to put up a memorial table, and a Bible is included in their checklist. The guidelines state that a Bible “represents the strength gained through faith to sustain us and those lost from our country, founded as one nation under God.” That may be fine for private displays, but not when the government is doing it, which is exactly what MRFF’s point has been all along.

That’s why Weinstein, a couple of weeks after that, requested that another VA clinic (this time in Youngstown, OH) remove a Bible from its POW/MIA display:

Weinstein, who is also a U.S. veteran and an attorney, argued in the letter that the government is prohibited from endorsing one religion over another.

“Why in the world would you ever want to make ANY of our nation’s cherished veterans feel as though they were less valuable… [by elevating] one religion over all others and no religion?” he asked in the letter.

This time, however, the clinic administrator said the Bible would remain part of the display:

Because the VA cannot endorse, favor, or inhibit any specific religion, we have consulted with our local Disabled American Veterans (DAV) Chapters who set up and maintain this display at the Youngstown VA Outpatient Clinic. The Cleveland VA Medical Center supports their decision to maintain a bible as part of the traditional POW/MIA Missing Man Memorial.

We’ve heard similar responses regarding Christmas displays in state capitol buildings. The government officials keep the Christian display in place, assuming no one will challenge it or ask for equal treatment.

But as any fan of The Satanic Temple knows, that’s a bad assumption. If there’s an open forum, you can bet non-Christian groups are going to demand equal representation. And that’s what MRFF did, courtesy of member Captain Jordan Ray (U.S. Army, Retired):

… I wish to exercise my right as a veteran to place a memorial table in your facility. The placement desired is just to the left of the POW/MIA table so as that the POW/MIA table not be granted supremacy of my table in regards to location and its visibility.

The table will be the same size dimensions as the MIA/POW table, but will feature no chairs. There will be a statue of the “three Soldiers” representing honors to Soldiers of Foreign wars…

As my Father was in Vietnam, and his religion was Judaism, there will be a copy of the Torah emplaced on the table.

As I am a 100% disabled combat veteran of the Afghan war, and am an atheist, there will be a copy of “The God Delusion” by Richard Dawkins.

And just to add a little more punch to the matter, MRFF Advisory Board member Bobby Muller, a past winner of the Nobel Peace Prize, sent a letter to the VA administrator urging a change in the policy:

Including a Bible as part of a POW/MIA Missing Man display has no secular purpose and can only advance the particular religion of Christianity. This plain truth is evidenced by the fact that many such displays absolutely do not include a Bible or any other religious text — so it is not the traditional element it is now claimed to be. Including the Bible turns a display intended to honor brave soldiers, sailors, airmen, and marines into a display honoring only Christian service members. This travesty is not only unconstitutional, it is intolerable and insulting to the many non-Christian service members who have sacrificed so much in the defense of this country.

Looks like the pressure — or maybe the idea of a Dawkins book on a nearby table — did the trick.

Yesterday, another administrator contacted Jordan Ray to let him know the Bible would no longer be part of the display, rendering his request moot:

Thank you for reaching out to us with your concerns regarding the POW/MIA Table at our Youngstown Community-Based Outpatient Clinic. Please know there is no longer a bible on the table. It was replaced with a generic book, one whose symbolism can be individualized by each of our Veterans as they pay their respects to those Prisoners of War and Missing in Action.

Having a bad day? Just think about what Todd Starnes’ face looks like right now and that should cheer you up.

Weinstein told me in an email statement:

Their erstwhile days of inherited Christian privilege, triumphalism, and supremacy are rapidly and most justifiably waning… it doesn’t at ALL mean that they’re being “persecuted”… On the contrary, they are merely being introduced for the first time to fairness and egalitarianism…

Indeed, the rest of us are JUST as good and valued as they are in the eyes of our country’s beautiful Constitution.

Let’s be honest: This is the solution VA officials should have implemented from the very beginning: Honor soldiers without promoting religion. It’s the same solution other VAs should adopt if they have a Bible on their POW/MIA display table. Removing it is just common sense, no matter what the FOX News crowd wants you to think.