When a recording surfaced of a 2014 conversation in which Bentley told a woman (not, for the record, his wife, who recently filed for divorce after fifty years of marriage) how much he loved touching her breasts, it put to rest the whole notion that Bentley was the “family values” guy he had always claimed to be. The anti-gay crusader, it seems, was only fired up about preserving marriage in the sense of denying it to other people, not depriving himself of extramarital dalliances. 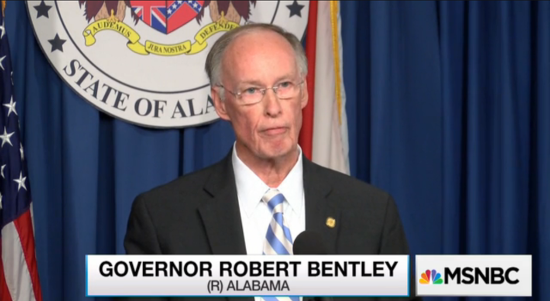 The good news, though, is that Bentley has sorted out the sordid mess he’s made of things.

As he revealed in an apology yesterday, he’s already tackled the most important thing.

I guess that’s good. Because once you’ve got the Big Guy’s forgiveness, you’re in the clear. (Apologizing to your then-wife? That’s lower on the priority list.)

Unfortunately for Bentley, the Big Guy doesn’t vote. So Bentley also requested forgiveness from the people of Alabama:

“But I asked other people to again forgive me and I’ve already done that and I have truly asked the people of this state — they’re the folks who love me and are the best people in the world — I have asked them to forgive me.“

Bentley has already rebuffed calls for his resignation. He just wants forgiveness from his Friend from On High and his constituents for betraying all those values he preached from the pulpit governor’s podium.

Which kind of puts the “sanctity” of marriage into perspective. It’s completely negotiable when it comes to straight Christians, because there’s forgiveness aplenty to go around. There are no penalties and no censure.

But a gay couple wanting to get married because they genuinely want to be together? Amazing how quickly that well of tolerance and understanding dries up.

April 5, 2016 A Horrifying New Case of Islamophobia? Nah, Just Another Attention-Seeking Hoaxer
Browse Our Archives
What Are Your Thoughts?leave a comment