There is so much real Christian persecution around the world that no American Jesus fans should have to resort to thin-skinned self-victimizations.

Now, I’d like to extend the principle to Muslims. What the hell is wrong with people like this Tawana Brawley wannabe?

A woman of Middle Eastern descent told police she was slashed in the face by a man who called her a “f–king terrorist” on a lower Manhattan street Thursday afternoon. 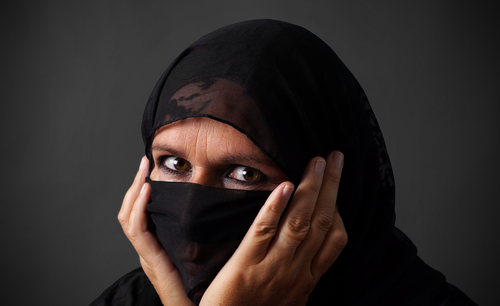 The 20-year-old beauty-school student said she was wearing a scarf on her head while walking on Broadway near Rector Street at about 4:20 p.m. She claimed her assailant grabbed her arm from behind and cut her face. … “She’s got a noticeable-sized cut to the left side of her cheek,” said a police official afterward. But cops scoured the area and checked surveillance video without finding any evidence of the attack, sources said.

After being questioned at Bellevue Hospital Center, the woman eventually told police that she had slashed herself, according to sources.

Cases of religious people perpetrating violent hoaxes in which they cast themselves as victims are not unheard of, at least across the two minority Abrahamic faiths. (Christians generally seem content playing the victim over simply not being given preferential treatment.)

In the late eighties, the Dutch actor Jules Croiset famously staged his own kidnapping by “neo-Nazis” to drive home the dubious point that Jews, like himself, were still being hunted. As if that desperate act wasn’t demented enough,

He also typed and sent menacing letters to prominent Dutch Jews in the name of a fictitious Dutch Fascist Youth Front.

And Croiset wasn’t quite done:

He sent one [such] letter to his wife, threatening the lives of their two boys.

I’m going to assume that, once the truth came out, Father’s Day was never quite the same in the Croiset household.

Stateside, in 2012, a Michigan student named Zachary Tennen pulled a Croiset by claiming that he’d been attacked by two men who asked if he was Jewish. When he answered yes, Tennen said, they made Nazi gestures and stapled his mouth shut. The blog you’re reading carried the story, too, but (like many other news sources) neglected to publish an update when, within the month, Tennen’s lies were exposed and his tale crashed and burned.

The young woman who slashed herself in Manhattan last Thursday follows in the footsteps of Carnita Matthews, the burqa wearer who filed a complaint against a cop, saying that during a traffic stop, he had insulted her faith and had attempted to rip off her garment. Islamophobia!

Funny thing: A video of the alleged incident showed that it never happened.

Equally noteworthy are the Austrian Muslim pizzeria owners whose business was targeted with hateful graffiti, including swastikas. Then someone burned the place down. Islamophobia! Scores of people demonstrated in support of the minority entrepreneurs and to defeat the scourge of racism. It soon emerged that the owners had set fire to their own building, both to garner sympathy and to collect the insurance money; they’d spray-painted the graffiti in order to mislead investigators.

We also mustn’t forget the unnamed 16-year-old Arab-American girl from Michigan who claimed she’d been “jumped” by a racist “mob.” Islamophobia!, cried the Council on American-Islamic Relations (CAIR), one of whose main missions is to spin the maximum amount of hay out of such alleged incidents. The police investigation ultimately concluded that the teen was “a willing participant or even aggressor” in a series of petty fights with another 16-year-old girl. No hate crime took place.

CAIR was also all over the case of Shaima Alawadi, who was found beaten to death in her California home, next to a note that called her and her family “terrorists” and told them to “go home.” Her husband, Kassim Alhimidi, told the Al Arabiya News that his beloved was taken from him by violent racists. See? Islamophobia! The poor man was seen crying over Shaima’s coffin at the funeral. But eight months later, police arrested … you guessed it: the doting husband, who’d bashed his spouse’s skull in with a tire iron because she had planned to divorce him. Once again, the xenophobic text was a diversion device planted by the killer.

Obviously (I hope), none of this is to say that instances of outright hatred or violence toward innocent Jews or Muslims (or “suspected” Muslims) can’t be real. They too often are, and they’re downright despicable, and we condemn them every time.

But how pathetic is it when you’re reduced to staging a hate-crime attack to score points for your tribe? Does it truly not occur to these lunkheads that the very fact they’re inventing crimes in order to prove how bad things are, seems to be establishing the opposite? Clearly, the hoaxers are hurting, not helping, their cause.

P.S.: I’ve been racking my brain, and trawling Google, to see if I could turn up examples of atheists faking a hate attack against themselves. No dice, but if you know of such a story, do share it in the comments, or drop me a note and I will add it here. Fair’s fair.