Boko Haram’s Sex Slaves, Many of Whom Are Now Free, Are Feared and Shunned April 4, 2016 Terry Firma

Boko Haram’s Sex Slaves, Many of Whom Are Now Free, Are Feared and Shunned

Remember the 270-something school-age girls from the town of Chibok, kidnapped en masse two years ago, who inspired the short-lived international Bring Back Our Girls movement? Well, funny story — but not ha-ha funny. In fact, it’s relentlessly bleak. 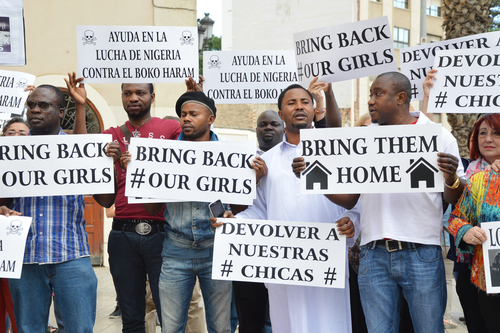 While most of those schoolgirls from Chibok are still missing, many people assumed the other kidnapped women would be warmly welcomed back. Instead, they are shunned.

For seven months, Hamsatu, now 25, and Halima, 15, were among Boko Haram’s sex slaves, raped almost every day by the same unit of fighters in the remote Sambisa Forest. Now [after their rescue], they live in a narrow, white tent in a displacement camp, with empty cement bags sewn together to create a curtain.

When they were still captives, Hamsatu and Halima (who, incidentally, are not from Chibok) were raped almost daily, often by Boko Haram fighters who said a prayer before forcing themselves on the young women. Gotta honor God, don’t you know.

The women and girls

… were kept in tiny thatched huts in the middle of the forest, waiting with dread each evening for their rapists to return… The victims were as young as 8. At the heart of Boko Haram’s self-proclaimed caliphate in northeastern Nigeria was a savage campaign of rape and sexual slavery that has only recently been uncovered. Thousands of girls and women were held against their will, subject to forced marriages and relentless indoctrination. Those who resisted were often shot.

To their prisoners, the fighters’ campaign didn’t seem driven by ideology so much as a wild appetite for sex and violence.

But religion was always on the men’s minds. Sometimes Hamsatu’s captors screamed at her for not praying enough. “Even the Chibok girls [who were Christians when they were taken] are better Muslims than you,” an angry Boko Haram rapist told her once.

Now, many of the women are suddenly free — rescued in a series of Nigerian military operations over the past year that dislodged the extremist Islamist group from most of the territory it controlled. But there have been few joyous family reunions for the victims. Most of the surviving women no longer have homes. Their cities were burned to the ground. The military has quietly deposited them in displacement camps or abandoned buildings, where they are monitored by armed men suspicious of their loyalties. They are still labeled “Boko Haram wives.”

Sadly, the suspicions are not always without merit.

Last year, 39 of 89 Boko Haram suicide bombings were carried out by women, according to UNICEF. Twenty-one of those female attackers were under the age of 18, many of them girls apparently abducted from villages and cities and converted into assassins. Since January, female attackers have killed hundreds of people across northeastern Nigeria, in mosques, markets and even displacement camps.

As for Hamsatu, she gave birth last summer to the child of one of her rapists. The infant is already tainted with the miasma of mistrust.

Her daughter made her an even greater target of scorn. In many Nigerian communities, people believe that the father’s blood courses through the veins of his child, “so that at some point in the future they will be likely to turn against their own community,” said Rachel Harvey, UNICEF’s head of child protection in Nigeria.

The Nigerian government has tried a de-radicalization program for those allegedly brainwashed by Boko Haram, but it was shut down after only about 300 people went through it.

April 4, 2016 Air France Female Flight Attendants Refuse to Fly to Tehran Over Head Scarf Demand
Browse Our Archives
What Are Your Thoughts?leave a comment