Secular culture and religious culture are at each other’s throats again — this time at 30,000 feet. 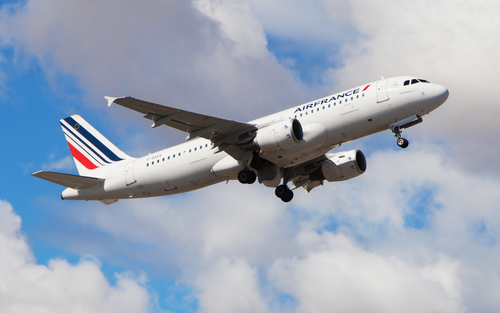 Air France stewardesses, furious at being ordered to wear headscarves in Tehran, say they will refuse to fly to the Iranian capital when the airline resumes the service later this month. Female members of flight crews have been ordered to cover their hair once they disembark in Tehran and unions are demanding that the flights be made voluntary for women.

The resumption of a thrice-weekly service between Paris and Tehran, planned for April 17 after an eight-year break, follows a thaw in relations since Iran agreed to dismantle large sections of its nuclear program.

Iranian women have been forced by law to cover their hair or face stiff fines since the 1979 Islamic revolution. In staunchly secular France, however, public signs of religion have been frowned upon since a 1905 law separating church and state.

In general, says the British Telegraph,

French women see Islamic headscarves and veils as an affront to their dignity. Headscarves are banned in French state schools and offices, and it is illegal to wear the full-face Muslim veil in public. Flore Arrighi, head of the UNAC flight crews’ union, said: “It is not our role to pass judgement on the wearing of headscarves or veils in Iran. What we are denouncing is that it is being made compulsory.”

Even as an atheist, I’m not sure this one is worth fighting over. “When in Rome, do as the Romans do” is a time-honored principle for travelers, and I personally don’t think that the demand for a headscarf is onerous.

Then again, I’m not the one who is being asked to comply; and I do understand that the French flight attendants feel strongly that they are being made to wear a symbol that, to them, is uncomfortable at best and demeaning at worst.

The best solution might be for Air France to find flight attendants — including Muslim ones — who have no moral or practical objections to donning a headscarf.

April 4, 2016
Boko Haram's Sex Slaves, Many of Whom Are Now Free, Are Feared and Shunned
Next Post