“In God We Trust” Sheriff Pleads Not Guilty After Being Indicted for Abusing Prisoners April 3, 2016 Rachel Ford

According to Iberia Parish (Louisiana) Sheriff Louis M. Ackal, believing in God is necessary in ensuring you have good police officers. That was his reasoning last year when his department put “In God We Trust” stickers on all vehicles.

But while God-belief is a requirement for good policing, apparently “not beating inmates” isn’t. (In chapel, no less.)

Recently, Sheriff Ackal was indicted by a Grand Jury as part of a federal probe into abuses committed by the department. 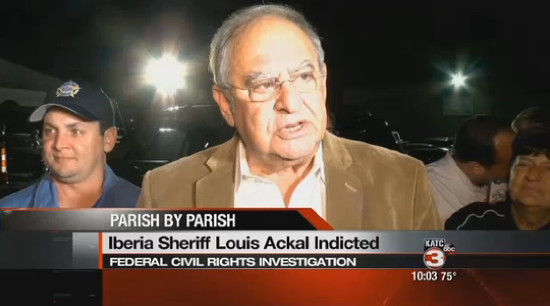 Ackal and [Lt. Col. Gerald] Savoy, along with several deputies, arrived at the jail on that day to assist in a contraband search. Ackal allegedly ordered Byron Lassalle, a former employee who pleaded guilty last month, to “take care” of an inmate who made a lewd comment. Then he and Savoy watched Lassalle ask then-warden Wesley Hayes if there was a place in the jail without cameras. Hayes directed him to the chapel, where the inmate was beaten with batons.

At another point during the shake down, Ackal allegedly encountered another inmate who had written letters complaining about the conditions of the jail, and told deputies to take him to the chapel.

Guilty pleas have already been entered by eight former Sheriff’s Office employees. The God-fearing sheriff on Thursday morning, however, entered a not guilty plea and had nothing to say after the arraignment:

When News 10 asked the Sheriff about allegations that he sent detainees into the chapel to be beaten, he replied with, “I can’t answer those questions pal.”

Abusing prisoners and loving God isn’t the only reason the Iberia Parish police have garnered headlines recently; it was in the back of one of their vehicles where Victor White III allegedly shot himself to death… while handcuffed.

Reverend White, the dead man’s father — who argues that his son’s case should be reopened based on the pattern of abuse investigation has turned up — did not miss the bizarreness of a department that is so proud to declare their trust of God on public vehicles, turning the chapel — which presumably would be a sacred space — into the scene of violence and abuse:

If truly he trusted in God, if he did he would not have desecrated the temple. Where they were when they were doing these matters of evilness to those individuals in there. He took them to the very place where you could find solitude, or you could find peace of mind.

Of course, I’m sure such pious evangelizers imagine themselves forgiven. And if not, maybe a few more bumper stickers will convince the Good Lord to overlook beating and abusing captive human beings.

(Screenshot via KATC. Thanks to Brian for the link)

April 3, 2016
Bryan Fischer: We Can't Punish Women Over Abortions Yet Because They Don't Know Any Better
Next Post