Bryan Fischer: We Can’t Punish Women Over Abortions Yet Because They Don’t Know Any Better April 3, 2016 Rachel Ford

Bryan Fischer: We Can’t Punish Women Over Abortions Yet Because They Don’t Know Any Better

While Donald Trump was quick to publicly walk back such talk, the idea of punishing women for having abortions is not a novel concept. It’s not only what happens all over the world where abortion is illegal, but the same fetal protection concerns are putting women in prison in the United States despite the fact that abortion is legal. Furthermore, legal punishments for abortion are something plenty of anti-choice activists advocate for — including those heralded as heroes and colleagues by Ted Cruz and other prominent Republicans.

The reality is, punishing women for their abortions is the mainstream anti-abortion position.

As far as optics go, that’s not good. If this week has taught us anything, it’s that Americans actually support a woman’s right to choose — so if anti-abortion forces are going to be effective in taking it away, it has to be done in a piecemeal fashion (at least until they have the political power to ban it outright). That’s why we see so many state laws slowly chipping away at that right, erecting absurd barriers, over-regulating clinics, etc. For now, conservatives would prefer to shift the abortion focus on health care providers, not the women who use their services.

So while the Troy Newmans of the world write in books for their fellow “pro-lifers” that women who get abortions are murderers who hire contract killers (a book, we should mention, that also called for the execution of abortion providers — and a book Ted Cruz‘s press release about his new anti-abortion coalition actually cited as evidence of what a great pro-life champion Newman is), their more public work is defaming Planned Parenthood as the organ smuggling, baby-killing face of Big Abortion.

So even as women actually face jail time because of anti-abortion legislation in this country, conservatives will often adopt the patronizing air that they’re just looking out for the little ladies. Because women just don’t know what’s best for them. That’s why they need to deal with waiting periods, mandatory ultrasounds, and requirements to listen to heart beats, descriptions of fetal development, and medically inaccurate information. Furthermore, the womenfolk have just been bamboozled by Big Abortion: Sure, they’re murdering their own babies, but only because they’re too stupid to know any better. 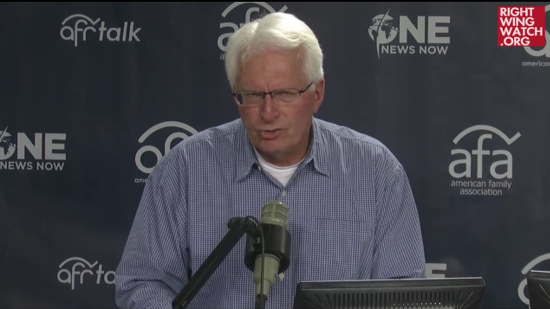 This is precisely the argument Christian extremist Bryan Fischer used on his show earlier this week. Although he made it perfectly clear that eventually there would be legal consequences:

The way I put is there is moral culpability — a woman is not off the hook morally for what she does. And I think we may be able to get to the point if everybody comes to understand — here’s the issue. We need to get the culture to the place where everybody understands that that is a baby, and if we can do that, if we can get a cultural consensus that that is a baby in the womb, then I think at that point you can begin to talk about legal consequences for the mothers. But right now not everybody believes that. We want the culture to understand that. In the meantime we want to save as many babies as we can, which means we’ve gotta stop the abortionists.  You know we still hold a mother capable if she gives birth to her baby and she flushes it down the toilet or she throws it into a dumpster… we hold the mothers accountable. Why? Because everybody knows — including the mother — everybody understands that is a baby, and therefore the legal consequences need to be brought to bear. Right now we don’t have that consensus as a culture, we couldn’t get there if we tried. But we can find a way to put abortion clinics out of business, we can find a way to go after abortionists for what they do. And I think that’s where we need to focus.

So there is moral culpability for a woman who does it — in fact, the reality is a lot of times what happens to women is they do not realize how morally culpable they are for what happens until later, and then the reality of what they have done kind of crashes in on them and then it just devastates them when they realize what they have done. They didn’t know better. Nobody told them. Nobody tried to talk them out of it. Nobody explained the humanity of the baby in the womb, so they did not know what they were doing.

Fischer went on to compare women who have abortions to the “clueless” Roman soldiers who crucified Jesus, and abortion doctors to the scribes and Pharisees who knew exactly what they were doing.

But just in case there was any misunderstanding, this goal — once it’s “accepted” and anti-abortion legislators can “actually be able to enact legislation” along those lines — is the only thing that could realistically happen if abortion is a crime: legal consequences for the women who procure an abortion.

“I realize from a purist standpoint, there should be legal culpability for a woman,” he later admitted. “Maybe some day we can get to that place where that would be accepted and we would actually be able to enact legislation like that.“

In general, the pro-life community is better at public relations than Donald Trump, in that it doesn’t broadcast these goals. But the fact that women are just too-clueless-to-know-better is as disingenuous as it is patronizing: it’s just a means of softening the tone for a movement that wants to criminalize the exercise of reproductive rights.

Fischer’s words are just the latest piece of evidence in defense of that.

April 3, 2016
Angry Christian Protester Freaks Out Over Easter Bunny and People at an Easter Egg Hunt
Next Post

April 3, 2016 "In God We Trust" Sheriff Pleads Not Guilty After Being Indicted for Abusing Prisoners
Browse Our Archives
What Are Your Thoughts?leave a comment