Yet another state is using the excuse of “religious freedom” to try to justify heinous discrimination against LGBT people, and advocates say this one might be the worst of them all.

Mississippi’s House Bill 1523 would protect people and businesses who choose to discriminate against LGBT people on the basis of their own religious beliefs. But unlike bills that have come before, the extent to which it defends anti-LGBT bigotry makes it especially problematic. 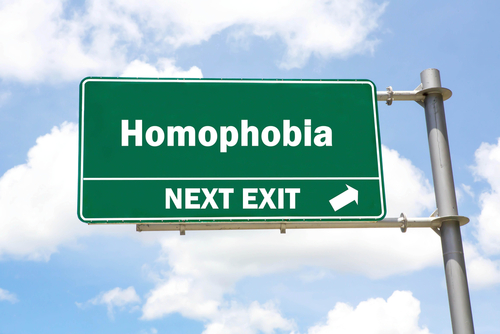 “This is probably the worst religious freedom bill to date,” Ben Needham, director of Project One America, an LGBT advocacy project in the Deep South run by the Human Rights Campaign, told BuzzFeed News.

The 13-page measure prohibits the government from “discriminating” against a person and certain organizations for acting on their religious convictions.

The government also could not penalize a religious organization for denying housing, employment, or services.

It would protect those who believe “sexual relations are properly reserved” to opposite-sex marriages, and that being male or female is “objectively determined by anatomy and genetics at time of birth.”

It goes on to cover those enforcing sex-specific policies for employee or student dress or grooming, or concerning access to restrooms, showers, dressing rooms, or locker rooms.

AND it excuses medical professionals who refuse to serve transgender people or same-sex couples:

The bill then protects those who decline treatments, counseling, or surgeries related to sex reassignment or gender, identity transitioning — or declines to participate in psychological, counseling, or fertility services. The bill provides an exception for medical emergencies.

It has passed in the House and Senate and now heads to the desk of Gov. Phil Bryant. While he hasn’t said definitively whether or not he’ll sign it, his response to the bill isn’t encouraging:

“I think it gives some people as I appreciate it, the right to be able to say, ‘That’s against my religious beliefs and I don’t need to carry out that particular task,’” he said.

More than a handful of Mississippi legislators and LGBT advocates recognize how terrible this bill is, and we can only hope their perspectives lead the discourse from here:

“It is very broad and very dangerous,” said Erik Fleming, the director of advocacy and policy for the ACLU of Mississippi, who also served for 11 years in the state House. “It basically sanctions religious discrimination.”

“It is reminiscent of what happened 50 or 60 years ago in this same state,” Fleming told BuzzFeed News. “People say that it is just religious, but there were people who had a religious belief that black and white people should be segregated, and you’re opening that Pandora’s box again.”

“Why does this keep happening to Mississippi? Why do people keep thinking so badly of us?” he said.

“This is one of them,” he said. “It’s House Bill 1523 before us. They say it’s about same-sex marriage. If that’s the case, why does it include adoptions? Then why does it allow discrimination in medical services? The reason we are so adamantly opposed to it is because we have already been there.”

This news comes the same week that a federal judge struck down Mississippi’s ban on same-sex couples adopting children, showing that in some parts of the country, every step forward unfortunately comes with two (or three or eight) steps back. Perhaps the worst part is how this bill categorizes the excusing of anti-LGBT behavior as “protecting freedom of conscience from government discrimination” — for the discriminatory parties themselves.