Rachel Maddow had a 20-minute segment calling out the “profound hypocrisy” of the conservative handwringing at Donald Trump’s call to “punish” women who have abortions, and it’s well worth watching. We’ve covered some similar themes, but Maddow raises points that I haven’t seen elsewhere. 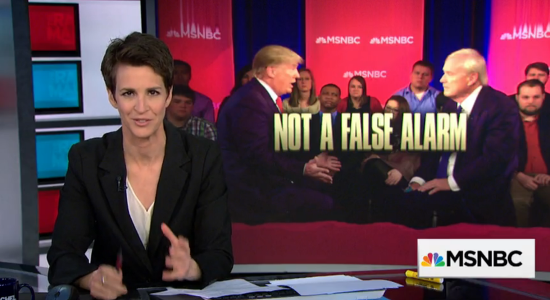 Among them is a demonstration of how incredibly mainstream the idea of punishing — including violently punishing — those involved with abortions really is among “pro-life” leaders. In particular, how those pushing violent retribution, rather than being censured, are embraced by prominent conservatives.

Troy Newman and Operation Rescue are examples she explores in depth. In the early 2000s, Maddow explains, Operation Rescue issued a statement decrying the execution of a man who murdered an abortion doctor and his security guard. In that statement, OR argued that it was “judicial tyranny” that the murderer was not allowed to present the defense

The contact on the statement is Newman, a familiar name to anyone who follows reproductive politics. You may remember him as the anti-abortion operative behind the infamous “baby body parts” Planned Parenthood videos. (This was a lie that was, in turn, cited by Robert Lewis Dear as his reason for murdering multiple people at a Planned Parenthood clinic last year: “no more baby parts.”) But Maddow explains that his activism goes beyond spreading the kind of lies that inspire murder. He has straight-out advocated violence against abortion providers — including writing in his book Their Blood Cries Out that abortion doctors should be executed “to expunge bloodguilt from the land and people.”

But, as we know, Newman isn’t an ostracized radical, shunned by moderate pro-lifers. On the contrary, Republican candidates have been tripping over themselves in eagerness this election cycle to cite Newman’s work. Carly Fiorina’s debate claims of Planned Parenthood harvesting the brain of a “fully formed fetus… its heart beating, its legs kicking” is perhaps the most infamous example of the “baby parts” lie, but she is by no means alone. Furthermore, Republicans aren’t just happy to utilize Newman’s work.

Ted Cruz in particular has sought an association with Newman, boasting of Newman’s endorsement and naming him a co-chair of the “Pro-lifers for Cruz” coalition. And in the press release announcing the co-chairs? A reference to the same book in which Newman called for the execution of abortion providers.

Troy Newman is the president of Operation Rescue, one of the leading pro-life Christian activist organizations in the nation and a founding board member for the Center for Medial Progress. He has been involved in the pro-life community for over 20 years, starting in 1991 as the Operation Rescue West president. He is also a published author, having written Their Blood Cries Out and his most recent book Abortion Free.

And as Maddow further notes, Newman’s book doesn’t just single out abortion doctors, but explains how women who have abortions are “murderers” and “contract killers” — and anyone who doesn’t “intervene” is guilty as well. Unlike Trump, by the way, Newman wants to treat men as murderers, too.

Why, then, do we consider any differently the women who seek to hire killers to murder their pre-born children? Why the hesitancy to say that not only the mothers, but also the fathers who willfully abort their babies, are guilty of murder? Why is there such outrage expressed at the notion that those who know of the crime but do not intervene, like most of the churches in America, share a portion of the guilt?

Who holds the fathers, the mothers, the neighbors, the pastors, and the bystanders guilty? Who would dare?

God can! God does!

Maddow’s piece covers a lot more ground, so if you’re interested in a pretty thorough takedown of the hypocrisy behind the pretense that punishing women is a line anti-abortion activists don’t want to cross, this is a great place to start. Fair warning: watching just how easily conservatives will advocate murder and violence to stop women from exercising their reproductive rights is enough to get your blood boiling.

April 2, 2016
Texas Baptists Prayed for a Drought to End. Two Years Later, They're Celebrating (for Some Reason)
Next Post

April 3, 2016 Beat This Game for Spaghetti Salvation
Browse Our Archives
What Are Your Thoughts?leave a comment