In Louisiana, where there’s still a(n unenforceable) law on the books that says Creationism can be taught alongside evolution, the Senate Education Committee voted 4-2 this week to leave that old law in place.

Why would they want to do that? Because, as State Senator John Milkovich said during the committee hearings, there’s plenty of proof in defense of Creationism: 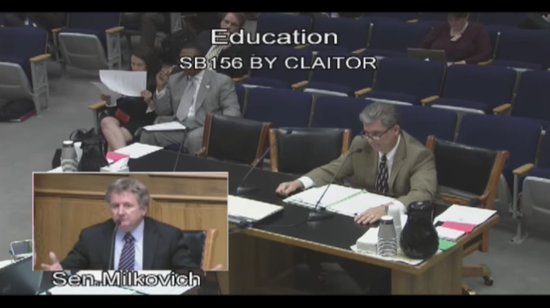 “Are you aware that there is an abundance of recent science that actually confirms the Genesis account of Creation?” Milkovich asked [State Senator Dan] Claitor during the Senate committee hearing on his law. “The notion of instantaneous Creation has been validated by the scientific study of heliocentric circles in rocks.”

Milkovich said explorers had “validated the Biblical story of Creation by the archeological discovery of civilizations in the Mideast that seculars said did not exist.” Milkovich claimed there is “published research” on the discovery of a “ark or large boat” on Mt. Ararat in Turkey, where Noah’s Ark was said to have landed after The Flood, as proof of creationism. (No such evidence exists.)

And “heliocentric circles in rocks” aren’t a thing, unless you’re talking about this, which still doesn’t “prove” Creationism.

There is no “recent science” that confirms Genesis. None at all. If you believe that lie… well, you probably took science classes in Louisiana.

It’s worth pointing out that Claitor, who proposed the repeal, is a Republican, while Milkovich is a Democrat.

And now my head hurts.

By the way, Zack Kopplin, a longtime watchdog of anti-science efforts in Louisiana, points out that even if the committee had passed this bill, evolution would still have been under attack:

Even if Claitor’s had succeeded in passing his bill, it wouldn’t change the fact that another Louisiana law, the Louisiana Science Education Act, allows teachers to supplement their biology curriculum with materials that “critique” evolution.

Congratulations, Louisiana. That’s what you get for bordering Mississippi.

April 2, 2016 The "Worst Religious Freedom Bill to Date" Heads to Mississippi Governor
Browse Our Archives
What Are Your Thoughts?leave a comment