It’s no secret that Gov. John Kasich is no moderate. He may appear to be, relative to someone like Ted Cruz, but his positions on their own are in no way centrist. Just look at how he responded to a question about the deplorable disparities between white and black Ohioans. 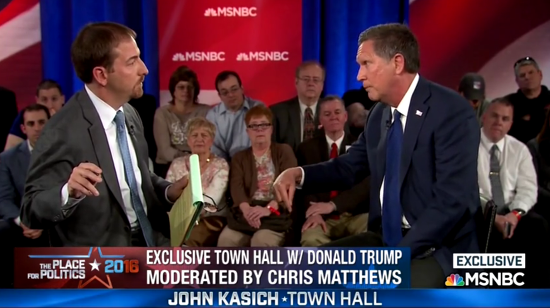 In a MSNBC town hall event earlier this week,

… [host] Chuck Todd pressed Kasich on his efforts within the black community, asking why, despite his efforts, “the Annie E. Casey Foundation ranked Ohio the sixth worst state to raise a black child in, median income, a $20,000 gap between blacks and whites in Ohio. Cleveland is considered one of the ten most segregated cities in the country.”

To demonstrate just how seriously he took these issues, Kasich turned the conversation toward infant mortality… where he proceeded to shrug off responsibility, blaming African American communities instead. Because he has tried, and, dammit, “the minority community” just isn’t doing what they should.

So I don’t know about all that study. I will tell you this. The issue of infant mortality is a tough one. We have taken that on and one of the toughest areas to take on is in the minority community. And the community itself is going to have to have a better partnership with all of us to begin to solve that problem with infant mortality in the minority community, because we’re making gains in the majority community. We don’t ignore any of this, Chuck. These are serious issues and they need to be addressed and I don’t put my head in the sand and if I got to get people upset doing it, that’s life.

So Ohio is in interesting company here, among states that are willing to move heaven and earth to stop abortions because they’re run by “pro-life” governments, but somehow miserably failing actual babies.

But it’s not just that Kasich isn’t doing enough. On the contrary, in his “pro-life” crusade, Kasich defunded the largest program in his state to address infant mortality.

Though Kasich expanded Medicaid, which brought health care to many low-income mothers, a lot of the gains were erased in February. That month he signed a bill to slash $1.3 million of state funding to Planned Parenthood and other organizations that “perform or promote” abortions (even though Ohio law already prevented state funds from covering abortions). The bill takes effect May 23. Among Planned Parenthood’s services is Healthy Moms, Healthy Babies, the largest of 14 infant mortality programs in the state.

“It is offensive to hear John Kasich tell black women what we should do with our bodies, though not at all surprising. John Kasich blames black women for infant mortality, while as Governor, he cuts programs that help black families in Ohio,” said Alencia Johnson, assistant director of constituency communications for the Planned Parenthood Action Fund in a statement.

That Kasich expanded Medicaid, and hopes to reach women through targeted state programs, is great. But that he’s willing to cut an established program that already serves thousands of women because it’s run by an organization that also, separately, provides abortions is troubling. And that he sees the issue as African Americans just not trying hard enough to cooperate with him is downright disturbing.

With these comments, Kasich outs himself as yet another “pro-life” governor who has no problem cracking down on abortion but struggles with saving actual babies. And Kasich manages to take it one step further. Because, you know, that’s the moderate thing to do.

April 2, 2016 Texas Baptists Prayed for a Drought to End. Two Years Later, They're Celebrating (for Some Reason)
Browse Our Archives
What Are Your Thoughts?leave a comment