There are high school teachers who are incredible, inspiring, and role models for students everywhere.

Gregory Hendrix isn’t one of those teachers. 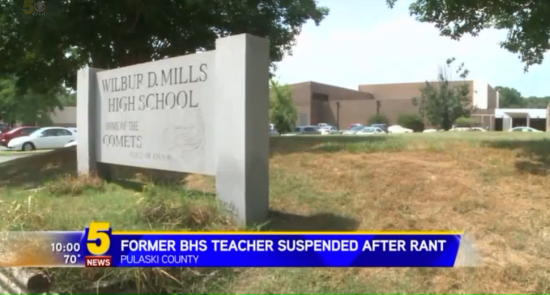 He used to teach at Bentonville High School in Arkansas. But when one of his football players decided to quit the team in order to join the cheerleading squad, Hendrix allegedly called the student a “faggot” and a “fucking queer” and was subsequently fired.

Recently, Hendrix decided to show The Passion of the Christ in class. When students complained about it, leading to a reprimand, he went off on a rant the next day.

He didn’t realize that his speech was being recorded:

… your First Amendment right to peacefully assemble in this classroom and to have free speech was ruined by one person. A liberal. I keep telling you, when Democrats are offended by something, or they don’t agree with it, they want to shut it down, they want to ban it, and they want to censor it.

Liberals want political correctness, and they want free speech, but they can’t have ’em both at the same time. But that’s what they want. It doesn’t work like that.

I keep telling y’all I’ll never understand how blacks can support the Democratic Party. It just blows my mind. All they do is convince y’all that whoever the Republican nominee is, is gonna take away food stamps and all this stuff. Put you in chains and send you back to Africa. Well, shit, if that was gonna happen, they’d have done it a long time ago, don’t you think? has a Republican ever done that? No.

Here’s the bottom line on Republicans, ’cause I am one. Actually, I’m a constitutional conservative. We just want you to get off your ass and go to work and be productive members of society and quit mooching off the government. Because someone’s paying for that: Me.

Your First Amendment right to free speech and to peaceful assembly has been violated. And if I were you all, I would take that person, I’d go complain to [Principal Duane] Clayton about it. That’s what I would do. And he already knows ’cause he agrees, and he’ll tell you the same thing I just did…

Free speech doesn’t mean you can promote Christianity in the classroom. You can’t promote Islam, either. The people protesting outside Trump’s rallies weren’t paid anything for it, much less #3,500 apiece. No one believes Republicans want to re-enslave black people; however, Republican policies routinely affect the African-American community in a negative way. And Hendrix has no idea what the word “terrorism” means.

After he finished complaining, he told the students they’d watch Star Wars in class… because Passion of the Christ was out of the question. Makes you wonder when he actually, you know, teaches them anything.

This sounds like a good time to point out that the plot of God’s Not Dead 2 is all about how persecuted Christians are in the classroom. The whole movie makes no sense because Christians are rarely the victims. If anything, they’re the bullies. People like Hendrix are proof of that.

Not that pro-Christian groups will acknowledge that. Just wait and see how many of them publicly denounce his actions and words. You’ll be waiting a long time.

Incidentally, the ACLU of Arkansas and Arkansas Society of Freethinkers have successfully gotten Hendrix suspended as a result of the recording. What happens to him in the long term has yet to be decided.