I was seriously ready to tip my hat to Creationist Ken Ham for pulling a fast one over all of us.

He has to know that atheists read what he says, and he must have decided, “Wouldn’t it be funny if I said something really crazy? Those atheists would believe it because they’re not real skeptics, and I’d have a good laugh at their expense.”

That had to be the reason for this tweet: 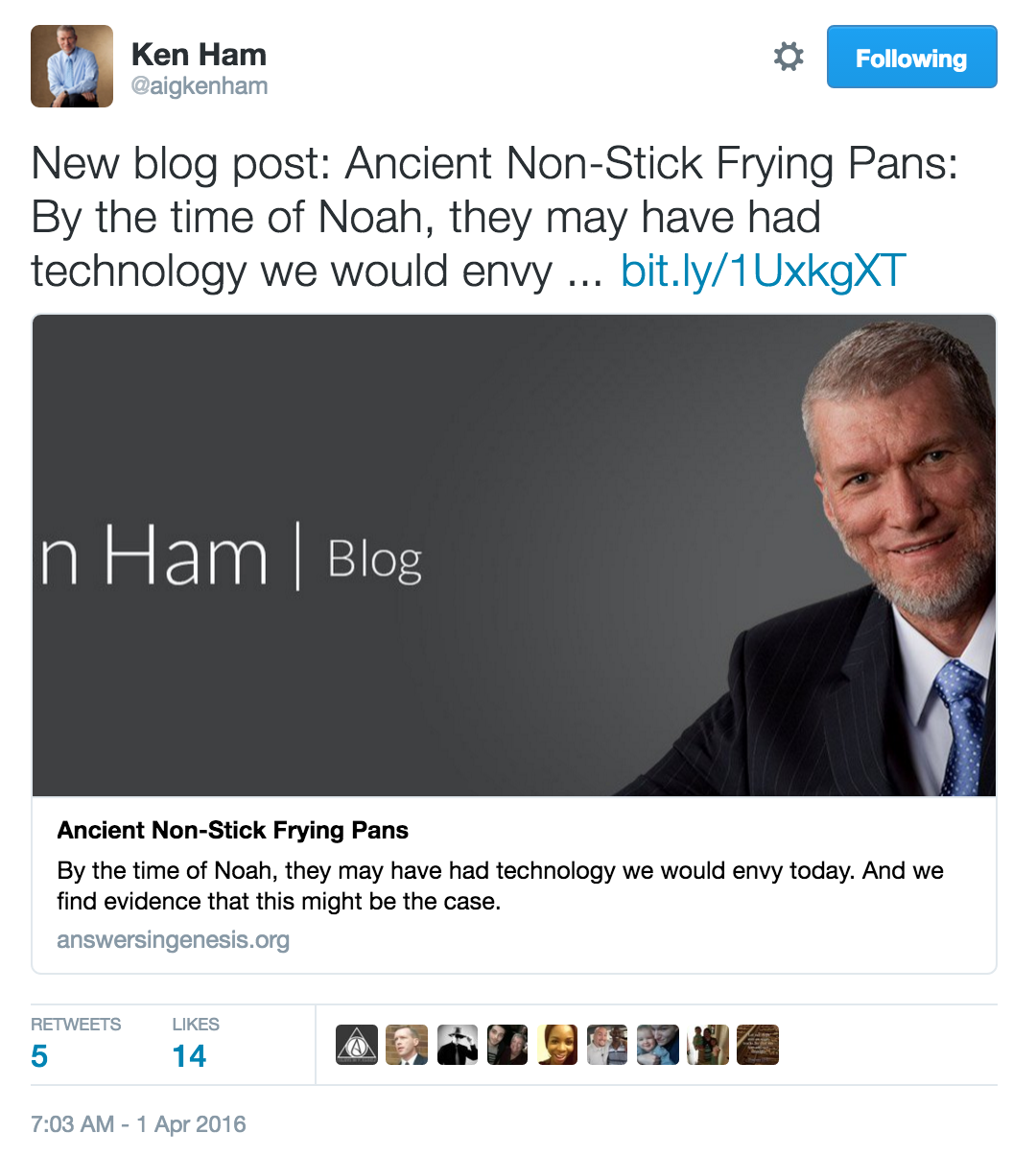 The premise of that tweet (and the article it linked to) was that the supposed existence of non-stick frying pans 2,000 years ago proves that technology is always improving… so of course Noah’s Ark could have been built as large and sturdy as the Bible story suggests:

A recent discovery made in Italy sheds more light on the intelligence of our ancestors. If you cook, you probably know the frustration of everything sticking to your frying pan. Well, people 2,000 years ago did too! So they invented non-stick frying pans. Found in a garbage dump near Naples, the high-quality pottery pans featured a “red-slip coating” to keep food from sticking.

Our ancestors, descendants of Adam and Eve and made in God’s image just like us, were every bit as intelligent as we are (probably even more so). They ran into problems and came up with innovative solutions to solve these problems, just like we do. There’s no reason to assume that they couldn’t do amazing things like build an Ark for the saving of mankind.

First of all, you could say that the development of language and writing, which took place long before the Greatest Frying Pan in History™, was far more important of a technological advance. But if the Pan is roughly 2,000 years old, it’s worth pointing out that Young Earth Creationists peg the Great Flood as occurring about 4,400 years ago. Somehow, the amazing technology that produced the Ark advanced so much in the next two millennia that we finally got around to making sure food doesn’t stick on our pans.

It’s more relevant to point out that having awesome technology for your time still doesn’t resolve the biggest logical flaws with the Noah’s Ark story.

He’s just kidding, right? As far as I can tell, no. He’s completely serious. He sincerely believes everything he’s saying.

April Fools Day doesn’t matter when everything you say is a joke.

April 1, 2016
This Is Perhaps the Finest Humanistic Text In Existence — and Chances Are You've Never Read It
Next Post

April 1, 2016 The Battle Over What Students Should Be Taught in Their Math Classes Rages On
Browse Our Archives
What Are Your Thoughts?leave a comment