In Texas (as in my own state of Wisconsin), abortion is illegal after 20 weeks. Why? Because, as one of the many weapons in the anti-abortion arsenal, “pro-life” legislators have decided to protect the fetus against pain by banning the procedure after 20 weeks… even though the science to back up the idea of fetuses feeling pain at that age just isn’t there. (Not that science would really make a difference at crisis pregnancy centers, anyway.)

As The Daily Beast’s Brandy Zadronzy points out, “A review of the evidence by the American Medical Association found that ‘fetal perception of pain is unlikely before the third trimester.'”

The Texas law allows for some exceptions — specifically, “where a woman’s life or physical health is in danger or when severe fetal abnormalities are present.” But you know what that doesn’t cover?

Instances like the one experienced by Daniel and Taylor Mahaffey, a couple who very much wanted a child, whom they had already named Fox: 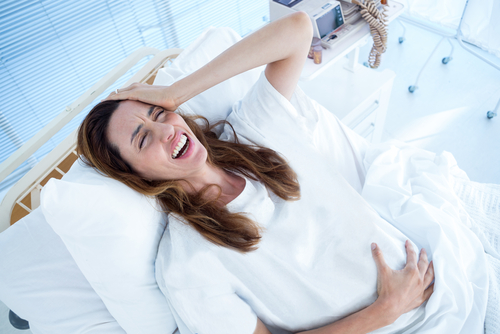 On Wednesday night, Taylor, 23, felt something abnormal and since their last pregnancy ended in miscarriage, they rushed to the hospital. By the time they got there, Fox’s feet were already pushing through his mother’s cervix. Doctors tried several emergency measures to stop the preterm labor, including putting Taylor on an incline in the hopes that they could perform a cervical cerclage — a procedure in which doctors stitch shut the cervix. Nothing worked. Nothing could save him.

With no hope of maintaining the pregnancy or saving the fetus at only 20 weeks, the Mahaffeys wanted to deliver early, rather than continuing the slow process of miscarriage.

The doctors and nurses at St. David’s Medical Center in Austin cried with them, but said because of Texas law HB2, they could not help speed Taylor’s labor. Technically, the baby was healthy and the mother was healthy, so to induce labor would be an abortion, and to do it at this stage in the pregnancy would be illegal.

The Mahaffeys were sent home to wait for their baby to die or for Taylor’s labor to progress. “We cried ourselves to sleep, waiting for him to come,” Daniel said in an interview with The Daily Beast.

This continued for four days.

When Taylor started bleeding, they went back to the hospital, but with Fox’s heart still beating, doctors couldn’t legally interfere.

“Eventually she was just screaming at them to get the child out of her,” Daniel said.

Finally, Taylor’s water broke and the ordeal came to an end. After days of prolonged physical and mental anguish.

And to what end?

If a fetus truly could feel pain at 20 weeks, drawing out its inevitable death would only be extending its suffering; even judging by the flawed basis for passing these laws, this is cruel and inhumane. And that doesn’t even include the pain of the prospective parents, both physical and emotional.

As Zadronzy notes, the legislators who passed this law heard testimony from women who had endured similar fates in other states where “fetal pain” laws were passed and from physicians whose focus was maternal and fetal health. Knowing full well the impact of the law they were discussing, they passed it anyway.

If that doesn’t tell you how little these legislators care about what’s best for women, parents, and fetuses, nothing will. It makes no sense, even by their own logic, to condemn a fetus that they believe feels pain to an extended death. It makes no sense to condemn pregnant women to carry doomed fetuses to term.

Incidentally, Georgia Representative Terry England summed it up best when he was arguing for including dying fetuses in his state’s fetal pain 20-week ban — by comparing women who are forced to carry dead fetuses to his experience on the farm delivering stillborn pigs and calves. If the animals could do it, so could the women. That sums up the “pro-life” view of women’s reproductive rights about as neatly as any one comment ever could.

And the suffering of people like the Mahaffeys? It’s just collateral damage in the ongoing Republican crusade to ensure that women have the same reproductive rights as farm animals.

April 1, 2016
Toronto Catholics Are Angry That a Local Hospital Has Dropped the Cross From Its Logo
Next Post