A Colorado School District Will Give Away Satanic and (Censored) Atheist Literature to Students April 1, 2016 Hemant Mehta

Later today, Satanic coloring books and atheist literature will be made available to students at Delta Middle School in Colorado, all because the administration allowed the Gideons to distribute bibles and didn’t want to shut down that practice. (To be sure, it’s a passive distribution. No adults will be at a table handing out the books. The material will just be sitting there for students who want to pick it up.)

But the atheist literature will include some overt censorship. 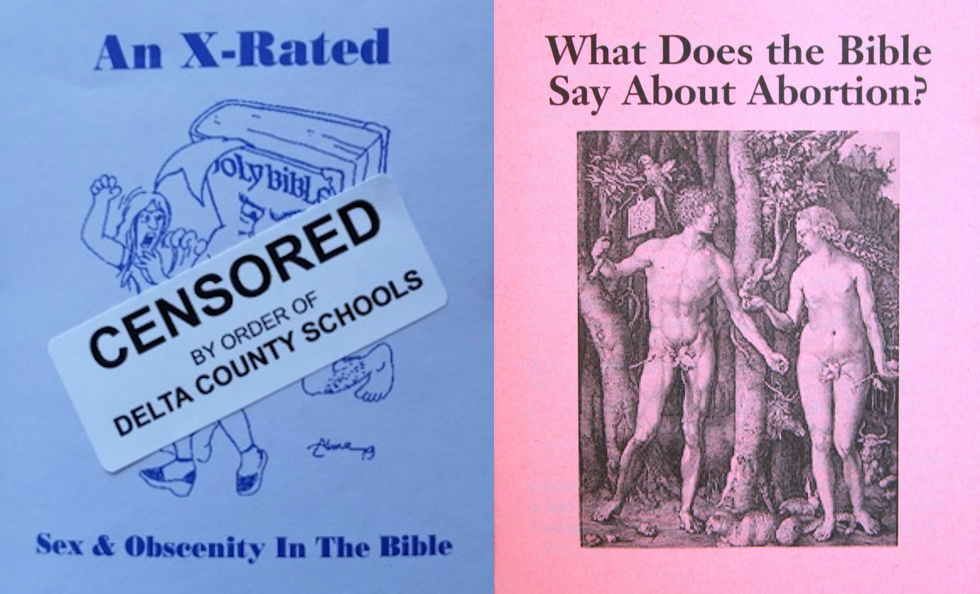 The School District has complained about two FFRF pamphlets: “An X-Rated Book: Sex and Obscenity in the Bible” and “What Does the Bible Say About Abortion?” Both of them are being limited to just the local high schools.

The School District objects to the cartoon cover of “An X-Rated Book,” which shows a bible groping a young woman.

“It is inappropriate in a school setting; we would not allow any of the high school students to wear or otherwise display such a cartoon,” says School District Attorney Andrew Clay. “Why would we allow them to carry it in the building? It may also qualify as hate literature, demeaning women.“

Is the cover provocative? Absolutely. But the only thing it suggests is that the Bible treats women poorly.

More importantly, that particular pamphlet consists entirely of quotations from the Bible. If Clay believes that’s “hate literature,” then why the hell would he be okay with the Bible distribution?

He doesn’t get to have it both ways. You can’t imply that the Bible is the Good Book, but censor a pamphlet that includes a list of passages directly from it.

In any case, FFRF has put a “censored” sticker on those pamphlets.

As for the pamphlet about abortion, the school says it’ll only be given out in the high school because the cover image is a “pornographic picture.”

“Albrecht Dürer’s famous depiction of Adam and Eve in Paradise can be called many things, but it is not pornography,” [FFRF attorney Andrew] Seidel responds. “Dürer completed this engraving in 1504, and it is one of the most technically precise woodcuttings in all of art history. It has been displayed in the world’s foremost museums and is a staple of most art history classes. The idea that this picture is somehow pornographic is, to be frank, absurd.“

The whole point of this exercise is to show the administrators that they can’t pick and choose which beliefs to promote. The fact that they’re resorting to absurd excuses to limit the “damage” a non-Christian group will cause is entirely their fault. If they don’t like the materials, they can put a stop to it all immediately. It’s that easy.

April 1, 2016
An Atheist Discusses the Benefits of Street Epistemology
Next Post

April 1, 2016 FDA Updates Abortion Drug Guidelines To Be More Scientifically Accurate, Angering "Pro-Lifers"
Browse Our Archives
What Are Your Thoughts?leave a comment