What Donald Trump Said About Abortion Was Bad; What He Said After That Was Worse March 31, 2016 Hemant Mehta

What Donald Trump Said About Abortion Was Bad; What He Said After That Was Worse

By now, you know that Donald Trump told Chris Matthews yesterday that he believes abortion should be banned and that, if that were to happen, women who had abortions deserved “some form of punishment.”

He didn’t specify what that punishment would be. And he later backtracked, saying it’s the doctors in that situation who should be punished, not the women. Both comments were disturbing. But if you’re looking for a positive spin on the issue, maybe it’s that Trump has never given much thought to this issue, and his comments were based less on conviction and more on what he thought conservatives wanted to hear. Maybe he didn’t really mean what he said.

That wasn’t the only thing that disturbed me about his response, though. What he said afterwards was arguably worse. 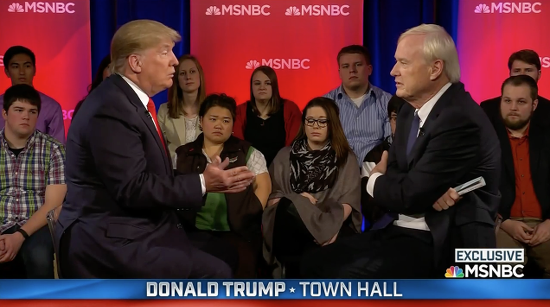 If you listen to the complete exchange — not just the clip that was repeated on television yesterday — Trump spent a lot of time grilling Matthews about his religious beliefs regarding abortion. As if they mattered.

Matthews, a Catholic, made clear he’s personally pro-life, in line with the Church’s teachings, but he added that he’s politically pro-choice since he thinks women should be able to make their own decisions on the matter.

His Church doesn’t control their lives.

MATTHEWS: But you say, one, that you’re pro-life, meaning that you want to ban it.

MATTHEWS: I’m not talking about my religion.

TRUMP: So you’re against the teachings of your Church?

MATTHEWS: I have a view — a moral view — but I believe we live in a free country, and I don’t want to live in a country so fascistic that it could stop a person from making that decision.

TRUMP: But then you are…

MATTHEWS: That would be so invasive.

TRUMP: I know but I’ve heard you speaking…

TRUMP: But I’ve heard you speaking so highly about your religion and your Church.

TRUMP: Your Church is very, very strongly as you know, pro-life.

TRUMP: What do you say to your Church?

MATTHEWS: I say, I accept your moral authority. In the United States, the people make the decision, the courts rule on what’s in the Constitution, and we live by that. That’s why I say.

Think about what just transpired.

Matthews’ position is not hypocritical. It’s just a simple application of church/state separation. Just because your faith compels you to act a certain way doesn’t mean everyone else should be forced to do the same thing.

Trump couldn’t grasp that concept. He couldn’t fathom how someone could claim to be a devout Catholic… yet advocate for a position that didn’t align with Catholic principles.

What does that say about him? If Trump is trying to appeal to an evangelical Christian base, he’s admitting that he would always push for policies that enforce conservative Christian beliefs. To do otherwise would suggest that he’s not a True Believer.

So much for women’s rights, gay rights, science education, sex education, and climate change. His mind can’t handle the idea that your personal beliefs and the decisions you make for the whole country aren’t always going to overlap. It’s his way or bust. And that sort of black/white thinking spells disaster for the country.

By the way, right after the two men spoke about abortion, Trump was asked about his position on LGBT (and specifically transgender) rights.

His dodgy response? “The courts have decided… I’m going to go by the laws of the courts.”

Someone should tell him about Roe v. Wade.