I thought I’d seen everything when it comes to clergy and drugs. For instance, three years ago, Monsignor Kevin Wallin got caught dealing some four pounds of meth (and generally being a kinky sumbich) in Connecticut. He followed in the footsteps of the Reverend Mark Derksen, of Arizona, who sold heroin to all comers (but only, he claimed, to bring poor souls “closer to God”).

Now an Indiana representative of God, fundamentalist preacher Robert Jaynes, may have outdone them both, having produced, with others, close to 200,000 pounds of “spice” or “K2,” a synthetic drug.

Walter White lives, but he’s no chemistry teacher; he’s a professional god botherer who loves telling you how to be a moral person. 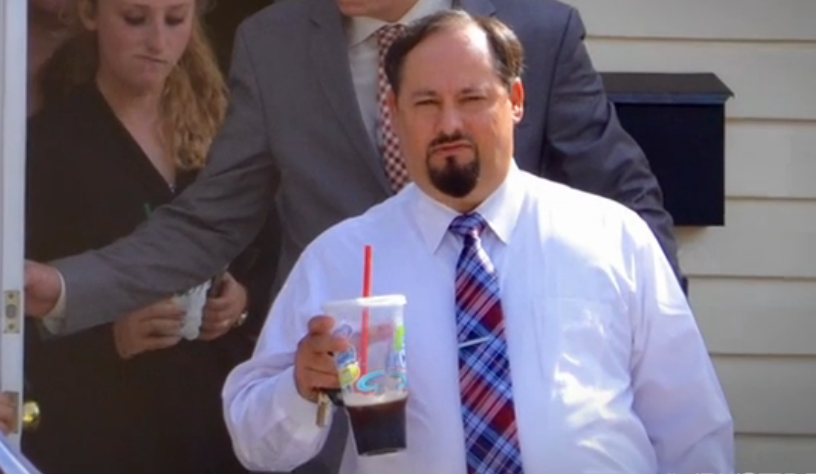 A central Indiana pastor has admitted to using his congregation as a virtual employment agency for a large synthetic drug operation.

Robert Jaynes Jr., 45, of Irvington Bible Baptist Church in Indianapolis pleaded guilty Tuesday to producing almost 100 tons of synthetic marijuana and conspiracy to commit fraud through the mislabeling of the controlled substance. His plea agreement, which was filed in federal court in St. Louis, said he sold the drugs for $2.6 million.

The pastor’s brother-in-law, Kirk Parsons, 47, pleaded guilty to the same charges. … Other members of the church, including two former Hendricks County sheriff’s deputies, also face charges for their involvement in the operation.

Apparently, in Jaynes’ church, the Lord couldn’t provide enough of a high.

The whole sordid story of his drug operation is here, courtesy of the Indianapolis Star.

For shits and giggles, you might also want to check out Jaynes’ 2014 YouTube sermon on “How to keep the Devil from ruining your Spiritual Life.” In it, he warns his flock against earthly temptations:

When we come to Jesus Christ, we are no longer supposed to be partakers of the evil life. … The Bible tells us the devil is trying to deceive people and trick people and blind them and destroy them.

If you say so, Reverend.

Right now, Jaynes is out on bail. He’ll be sentenced in July.

(Screenshot via the Indianapolis Star)

March 31, 2016
"In God We Trust" Monument Goes Up Outside Arkansas Courthouse
Next Post

March 31, 2016 Hillary Clinton Buys Neil deGrasse Tyson Poster During Trip to Wisconsin
Browse Our Archives
What Are Your Thoughts?leave a comment