“In God We Trust” Monument Goes Up Outside Arkansas Courthouse March 31, 2016 Hemant Mehta

“In God We Trust” Monument Goes Up Outside Arkansas Courthouse

When conservative Christians realized that they could get away with putting “In God We Trust” on police cars and fire trucks and city halls, you knew it was only a matter of time before things got even more out of hand.

In Malvern, Arkansas, outside the Hot Spring County Courthouse, there’s now a large monument with the phrase on it: 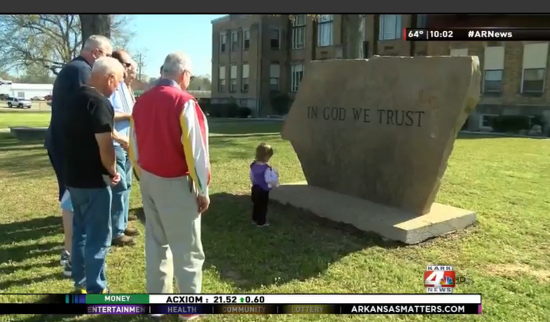 Signs on county property that read, “Jesus is Lord over Malvern,” resulted in threats of lawsuits across the country.

“The basic foundation for religion is to help your fellow man,” Scrimshire said. “I don’t think there’s anything wrong with that being applied to government.. ‘In God We Trust’ is our nation’s foundation.”

“It’s important to remember where we’ve come from,” said Don Hilyard, a Hot Spring County quorum court member. “f you take a look at our founding fathers, what they believed and why they came here, they came to have religious freedom.”

This isn’t about patriotism or our country’s history. This is about pushing God through the government in the way that’s least likely to get people in legal trouble. Their first attempt didn’t work because it was too overt. They think this one will. And unfortunately, they’re probably right.

Where do we go from here?

It won’t be long before some clever Christian makes another monument with the word “GOD” larger than the other words.

Or maybe they wrap the words around the monument so that the word “GOD” just happens to be on the side that everyone can see.

At what point do the courts recognize that this, too, is just promotion of religion — and the Christian religion specifically — by government officials?

(Screenshot via Arkansas Matters. Thanks to Brian for the link)

March 31, 2016
Christian Extremist: Women Who Have Abortions Are "Sluts" Who Deserve the Death Penalty
Next Post