A teacher at Green Middle School in Canton, Ohio wanted to encourage her students to write in their journals, so she gave them a series of writing prompts every month. All of that sounds fine… until you realize there’s always an option promoting Christianity. 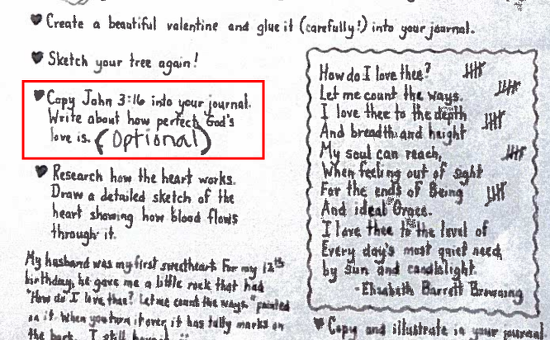 The Freedom From Religion Foundation expressed concern in a letter to the District earlier this month:

In January, for instance, she had students “write and illustrate a prayer for the new year,” while this month, she asked students to “illustrate Isaiah 11:6.”

“In these journal assignments, Hunka included assignments from the Christian bible, but from no other religious texts. These assignments are not part of a study of comparative religion or the history of religion, but rather provide lessons in Christianity.”

Even if the religious items were optional, this is a teacher who thinks the classroom is a vehicle to spread her faith. If the options promoted Islam or atheism instead of Christianity, we’d never hear the end of it from right-wing media.

At least the District understood the problem and took swift action. In a letter to FFRF, attorney Mary Jo Shannon Slick made clear that administrators spoke with the teacher, and her promotion of religion would stop immediately.

FFRF was thrilled with the quick resolution:

“Teachers indoctrinating young impressionable minds in the Christian faith is reminiscent of the bad old days,” says FFRF Co-President Annie Laurie Gaylor. “We’re happy that such misconduct has been ended.”

This is the way every District should handle similar problems. Assume the proselytizing was unintentional, get a promise that it won’t happen again, and move on. No lawsuits. No punishment for something so relatively harmless. And plenty of paperwork documenting the problem in case it ever happens again.