Christian Bishop: God Heals People Through the Olive Oil You Can Buy on My Website March 30, 2016 Hemant Mehta

Christian Bishop: God Heals People Through the Olive Oil You Can Buy on My Website

Kingdom Church in London has been in the news lately for holding noisy services at 3:00 in the morning. They’ve even been fined for noise pollution. So why bother? According to Bishop Climate Irungu, it’s because that’s when “demons and the spiritual world are most active.” (Sure they are…)

During an interview with ITV London, however, Irungu said something even stranger than that.

He explained that olive oil, which he sells on his website, is the cure to a variety of serious ailments. There are oils for everything from improving your marriage to getting a promotion. When a reporter called him out on this obvious fraud, Irungu kept a straight face and said it was all in God’s hands: 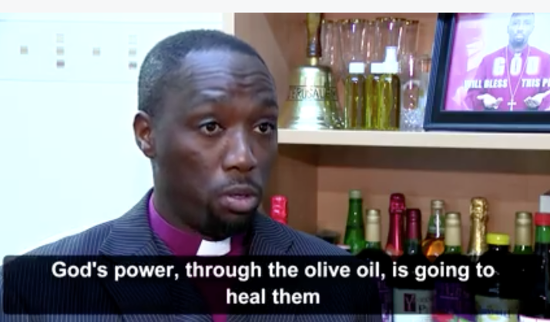 "God's Power, through the olive oil, is going to heal them"

"God's power, through the olive oil, is going to heal them" – watch bishop Climate Inguru explain to our reporter Ria Chatterjee how he uses olive oil to heal his congregation.Read about the church's fine from Southwark Council for noisy 3am services here: bit.ly/1MQ3dZ7

IRUNGU: It’s the olive oil plus other things like myrrh, frankincense, and all other types of oils.

REPORTER: But you’re telling people that olive oil is going to cure them of their ailment. That’s fraudulent. That’s misleading people.

IRUNGU: No. God’s power is going to heal them.

IRUNGU: God’s power, through the olive oil, is going to heal them.

Who knew God only worked through olive oil? I thought toast was his preferred medium…

(Given that olive oil is common when eating Italian food, I can only assume the Flying Spaghetti Monster is pleased by this revelation.)

And yet he’s still hawking the goods.

(Thanks to Martin for the link)

March 30, 2016
An Atheist's Brief Synopsis of the God's Not Dead Series
Next Post