An Atheist’s Brief Synopsis of the God’s Not Dead Series March 30, 2016 Hemant Mehta

Seth Andrews offers a brief look at God’s Not Dead 2 for those who aren’t familiar with the Christian propaganda series: 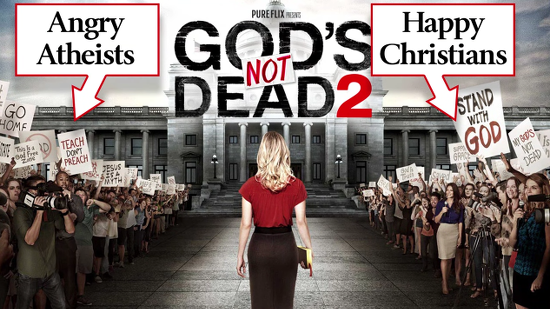 He’s right to wonder: who’s the target audience for this film? The people most likely to watch it are the people who already believe God’s not dead. (The rest of us are busy mocking the film’s premise.)

Not that it’ll make a difference. The film will make plenty of money with the Always Persecuted crowd. That’s all that matters, right?

March 30, 2016
Animated Video Recalls Carl Sagan on Religion: "A Literal Reading of the Bible Simply is a Mistake"
Next Post

March 30, 2016 Christian Bishop: God Heals People Through the Olive Oil You Can Buy on My Website
Browse Our Archives
What Are Your Thoughts?leave a comment