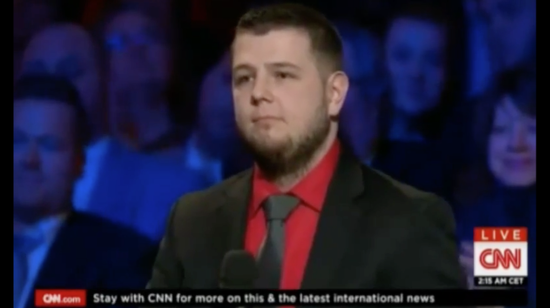 Cruz gave a long response, so let me break it down into pieces and explain why none of it made any sense:

DOUGHERTY: Hi, Senator Cruz. My question for you is: how and why does your religion play a part in your political decision making? Don’t you think it should be more of a moral belief and not something that could interfere with your decision-making when you’re making decisions for all religions in the United States?

CRUZ: … Listen, with me as with many people in America, my faith is an integral part of who I am. I’m a Christian and I’m not embarrassed to say that. I’m not gonna hide that and treat it like it’s something you can’t admit publicly and acknowledge it’s an important part of who you are…

How very, very brave of Ted Cruz to publicly announce his Christianity in a country where 70% of the population agrees with him.

At no point are Christians — moreso than any other belief system — prevented from announcing their beliefs publicly. It might be embarrassing in certain situations, but that’s only because conservative Christians ought to be ashamed of their beliefs. When you’re on a college campus surrounded by LGBT students, women, and other non-Christians, for example, then don’t whine when your evangelical views aren’t met with a standing ovation.

Also, the question wasn’t asked as a way to Christ-shame Cruz. It was about church/state separation. And we haven’t heard an answer yet.

CRUZ:… But I also think that those in politics have an obligation not to wear their faith on their sleeve. There have been far too many politicians that run around, behaving like they’re holier-than-thou. And I’ll tell you: My attitude as a voter when some politician says, “I’m running because God told me to run,” my reaction as a voter is, “Great! When God tells me to vote for you, we’ll be on the same page!”…

If that’s supposed to be a signal for voters to ignore candidates who say God’s on their side, it’s rich coming from Cruz, the man who announced his candidacy for President at fundamentalist haven Liberty University.

While Cruz himself didn’t say God wanted him to run, it may have been a deliberate omission. After all, Cruz’s father told a church audience that his son ran for President precisely because God gave his wife a sign:

My son Ted and his family spent six months in prayer seeking God’s will for this decision. But the day the final green light came on, the whole family was together. It was a Sunday. We were all at his church, First Baptist Church in Houston, including his senior staff. After the church service, we all gathered at the pastor’s office. We were on our knees for two hours seeking God’s will. At the end of that time, a word came through his wife, Heidi. And the word came, just saying, “Seek God’s face, not God’s hand.” And I’ll tell you, it was as if there was a cloud of the holy spirit filling that place. Some of us were weeping, and Ted just looked up and said, “Lord, here am I, use me. I surrender to you, whatever you want.” And he felt that was a green light to move forward.

Ted Cruz ran because God told him to run.

And if politicians “have an obligation not to wear their faith on their sleeve,” Cruz never got his own message. His “Religious Liberty Advisory Council” is full of Christian conservatives with a track record of pushing their beliefs through the government.

Life under his Presidency would be good for conservative Christians… and virtually no one else.

CRUZ:… and so, listen, I’m not asking you to vote for me because of my personal faith with Jesus Christ. I’m asking you to vote for me because I’ve spent a lifetime fighting to defend the Constitution and Bill of Rights, fighting to defend the American free enterprise system, and we need a leader who will stand up every day and protect the rights of everyone…

When Ted Cruz was the Solicitor General in Texas, he “defended the First Amendment” by fighting to keep a Ten Commandments monument at the Capitol building. The Supreme Court ruled in his favor because, they said, that monument was part of a larger display that didn’t promote Christianity, so that made it okay.

Even if you go along with that reasoning, surely a stand-alone Ten Commandments monument at a Capitol would be an illegal promotion of religion by the government, right?

Not in Cruz’s mind. When the Oklahoma Supreme Court recently ruled that such a monument needed to come down from that state’s Capitol, Cruz called it part of an “ongoing assault on religious liberty.” 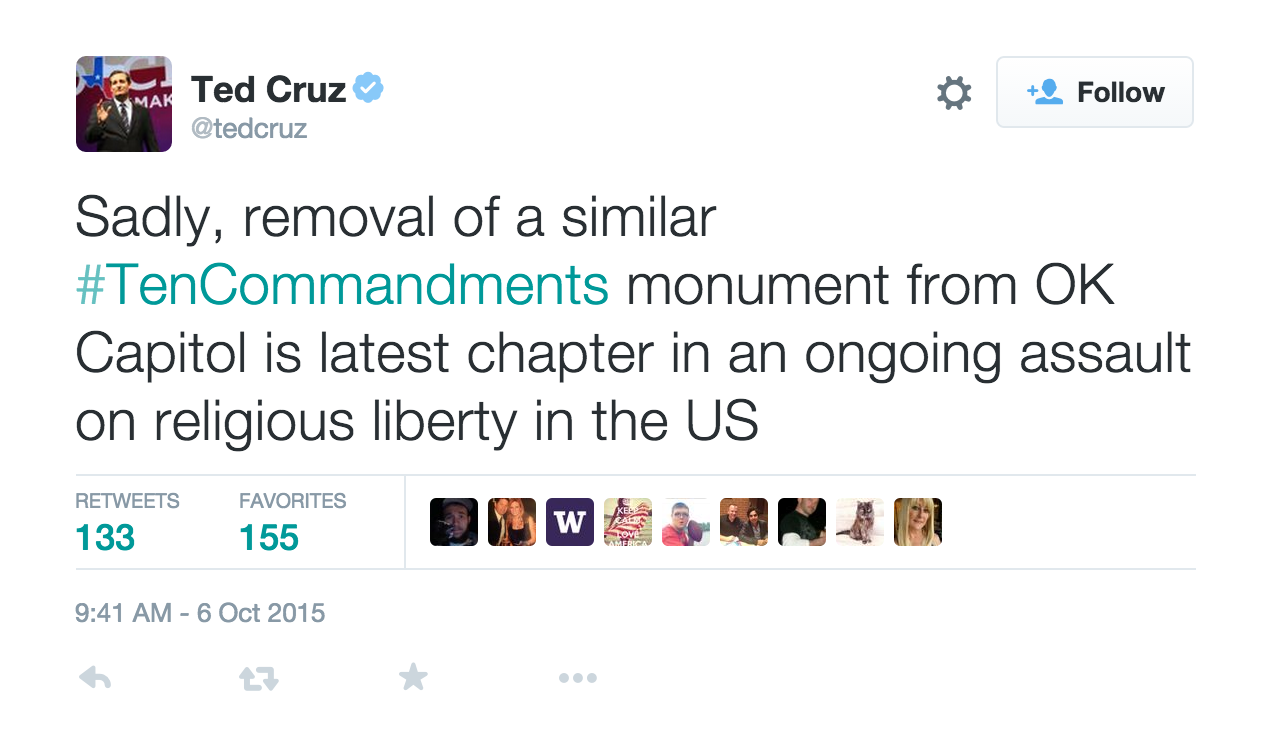 This isn’t an ambiguous case. This is a clear-cut violation of the Establishment Clause, and Cruz is on the wrong side of the issue.

You don’t get to call yourself a defender of the Bill of Rights when the only Amendment you seem to give a damn about is the Second one.

CRUZ:… whether they’re Christians or Jews or Muslims or anyone else, the Bill of Rights protects all Americans. It protects atheists! That’s the beauty of the Bill of Rights: that we have the freedom to seek out God, to worship, and to live according to our faith and our conscience, and I think the Constitution and Bill of Rights is a unifying principle that can bring us together across faiths, across races, across ethnicity, and we need to come together behind the unifying principles that built America.

It should protect atheists. But if Senator Ted Cruz becomes President Ted Cruz, you can bet atheists who support church/state separation would take a back seat to Christians who want to discriminate against others because their faith commands it.

The question Dougherty asked was: “How and why does your religion play a part in your political decision making?”

Cruz never directly answered that because the truth is that faith plays a role in everything he does. That might be okay if he were a random citizen, but it’s downright illegal when he’s supposed to be the leader of all Americans.

When the Constitution and Bible butt heads — and they frequently do — we know exactly which side Cruz would land on. The man who claims to love the Constitution would immediately chuck it in the back seat to appease the bigoted whims of his Christian base.

That’s the reason he would be a disastrous leader for anyone who cares about separation of church and state.

March 29, 2016
A Conversation About How to Disagree Without Being a Jerk
Next Post

March 30, 2016 Animated Video Recalls Carl Sagan on Religion: "A Literal Reading of the Bible Simply is a Mistake"
Browse Our Archives
What Are Your Thoughts?leave a comment