Some Christians Now Ask Waitstaff To Pray With Them Over the Meal March 29, 2016 Terry Firma

This past weekend, Redditor ByTheCreed had a particularly memorable meal with the in-laws. The family went to a restaurant, and when dinner was served — surprise! — ByTheCreed’s in-laws asked the waitress to pray with them. In a public eatery. 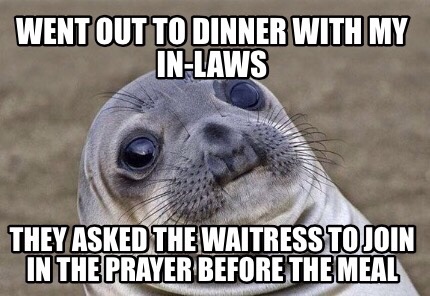 No waitperson, of any religious or non-religious persuasion, ever deserves to be put in a situation like that. It is unthinking at best and spitefully nasty at worst to essentially force a server to choose between acquiescing to the unbidden religious invitation and getting a decent tip. After all, turning down the customer’s request is pretty likely to offend him or her — and just as likely to affect that evening’s take-home pay.

Apart from financial factors, this kind of coercion is annoying/uncomfortable enough when you sit down with religious friends or family members. Pulling strangers into prayer, especially those who are in no position to decline, is arrogant, embarrassing, deeply unkind, and detrimental to the already-shaky reputation of the faith you are trying to push. According to Matthew 6:5, it’s even un-Christian.

So did the waitress give in? Yes, says ByTheCreed, cringing.

As per some instinct, since we had a small child present, we all held hands for the prayer. I was sitting at the edge of the table. I held the waitress’s.

As it turns out, these passive-aggressive invitations are not unheard of. One (non-religious) server even reports that her table of patrons asked her to lead the prayer.

If you work in a restaurant and this ever happens to you, consider handling it as another Redditor proposes — by telling the customers,

“Sure! Do you mind if I lead? Father Satan, I call to you from the deepest parts of my heart, I praise your name with every breath of my body, I worship you with every fiber of my being. You shown me what true strength is. You have shown me what true love is. Out of the darkness you came to show me the true light. My master, my father and my friend, what a great gift that is. Hail to the King!”

You might not even lose your job if you point out to your manager that you are constitutionally as entitled to your beliefs as the god botherers are to theirs.