Recidivist Lawbreaker Who Started a Firefight in Capitol Is a Pastor From Tennessee March 29, 2016 Terry Firma

The U.S. Capitol Building in Washington D.C. went into lockdown for about half an hour on Monday after security officers yelled the dreaded “Shots fired!” The cause of the disturbance was a pastor from Antioch, Tennessee, Larry Russell Dawson, 66, who is thought to have drawn a gun and pointed it at officers before being shot.

The pastor of St. Luke’s Church, outside Nashville, Dawson is unlikely to be fazed by the new charges against him; during previous incidents at the same D.C. location, he declared himself a “prophet of God” who cannot be expected to obey man’s law. 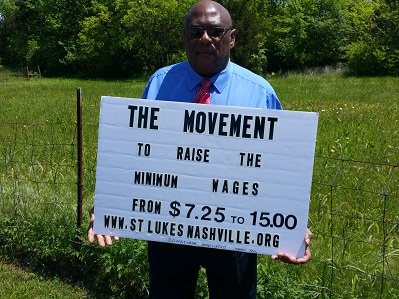 Via the Daily Beast:

[O]n Oct. 22, 2015, Dawson yelled, “I’m a prophet of God!” from the balcony of the House of Representatives. Dawson then allegedly ran from cops and resisted arrest, according to a police report exclusively obtained by The Daily Beast. Cops cuffed him for allegedly assaulting a police officer and unlawful conduct at the Capitol. The Washington Post reported that Dawson missed a court appearance in November, writing in a letter to the court: “I have been called chosen and sent unto you this day. I am not under the law!…Therefore I will not comply with the court order, nor will I surrender myself to your office.” …

Dawson… previously wrote online that he was leading a “movement” to urge Congress to raise the federal minimum wage to $15 per hour. “Our assignment is to do the will of God in the Earth,” he wrote on a crowdfunding website, citing financial independence as a way to save souls.

Doing God’s will apparently means disturbing public order and attempting to discharge a firearm in the heart of the U.S. capital city. Who knew?

At a press conference outside the Capitol on Monday evening, U.S. Capitol Police Chief Matthew Verderosa said that at approximately 2:40 p.m. Dawson “drew what appeared to be a weapon and pointed it at officers” during a routine screening at the Visitor Center. One officer fired and struck Dawson.

Dawson survived and is reported to be in stable but critical condition. He’s been charged with assault with a deadly weapon and assault on a police officer.

March 29, 2016
In Downtown Chicago, a Catholic Group’s Easter Display Has Some Godless Company Once Again
Next Post