Stop me if you’ve heard this one before: An atheist doesn’t want to take an oath to God in a courtroom, preferring instead to put his hand on the Constitution. Somehow this creates a scene, as if he’s making some over-the-top request.

The only different is that, this time, it’s happening in India: 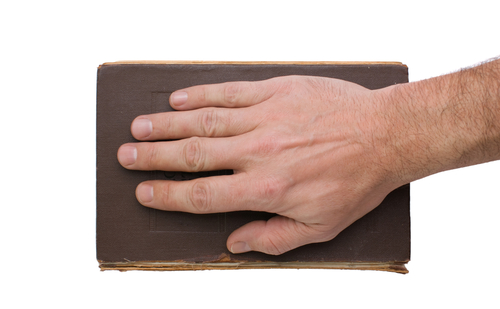 High drama ensued at the Pune district and sessions court on Monday, when Dnyaneshwar Molak, civic officer and zonal commissioner of Pune Municipal Corporation (PMC), refused to take an oath on the Bhagavad Gita and in the name of God, when summoned by the magistrate court. Molak claimed that he is an atheist and could not, in all honesty, take oath. However, he agreed to take it on the Indian Constitution.

Stunned by his stand, the magistrate first warned him that he could face action. But, as Molak remained firm on his stand, the court, to avoid further judicial deadlock, decided to take some time and deferred the hearing till April 5. The magistrate is now expected to decide whether Molak will be allowed to take the oath on a copy of the Constitution, or be punished for disobeying a court order.

Unlike the U.S., where there’s a secular alternative for people who don’t want to take a religious oath (or any oath for that matter), India doesn’t have another option. That’s why this is a news story. What Molak is asking for isn’t technically allowed.

Even other lawyers not involved in the case agree that there needs to be an alternative to the oath:

Harshad Nimbalkar, chairman of the Bar Council of Maharashtra and Goa, said, “Unfortunately, as of now, there is no other provision in the law other than taking the oath in the name of God. I certainly feel that there is a need to make changes. Considering the atheist population in the country, the law requires some flexibility.”

Advocate Wajed Khan Bidkar said, “People could take the oath and then lie. It is better to end a custom which has no relevance.”

Remember: The whole point of the oath is symbolic, anyway. People who want to lie on the stand will do so whether their hand is on the Bible, Constitution, or stack of Harry Potter books. Molak is simply asking for a silly ritual to be made a little less foolish. But it’s not like swearing on the Constitution will change what he says on the stand.

For everyone else to make a big deal out of this tells you how badly this ritual has gotten out of hand.

March 29, 2016
Canadian Priest Gambled Away Half a Million Dollars His Church Raised For Refugees
Next Post

March 29, 2016 India Supreme Court Won't Prosecute Atheist Author Because They Have Better Things To Do
Browse Our Archives
What Are Your Thoughts?leave a comment