Georgia Governor Vetoes Anti-LGBT Bill, but the State Has a Long Way to Go

Georgia Governor Nathan Deal, a Republican, surprised a lot of people this morning when he vetoed a bill that would have legalized discrimination against LGBT individuals.

House Bill 757 would have allowed clergy to say no to performing same-sex marriages (something they already had a right to do) and permitted faith-based organizations, including taxpayer-funded ones, to discriminate in hiring.

The NFL and other businesses had already warning Deal about possible repercussions should the bill go into effect. Deal insisted, however, that none of that played a role in his veto.

I guess he didn’t want to follow in the footsteps of North Carolina, a state that is quickly earning a new reputation as a magnet for bigotry. (As of this morning, that state is also the subject of a lawsuit from the ACLU and Lambda Legal.) 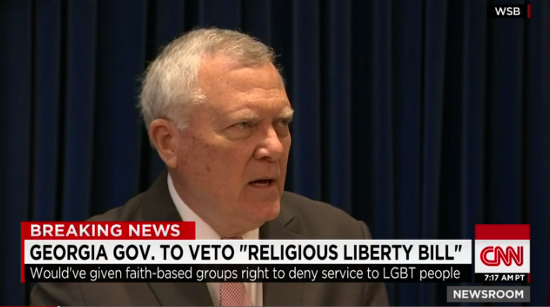 “Georgia is a welcoming state. It is full of loving, kind and generous people. And that is what we should want. They choose to worship God in the way they see fit in a myriad of ways, in a variety of different settings. I believe that that is our best side. And our people, every day, work side by side without regard to the color of their skin of their fellow mate. Or the religion that their co-worker might adhere to. They are simply trying to make life better for themselves, their families and their communities. That is the character of Georgia. I intend to do my part to keep it that way.”

Americans United for Separation of Church and State applauded the move:

AU Legislative Director Maggie Garrett said she’s glad that Deal listened to the people and businesses of Georgia and stayed true to his promise to reject a bill that allowed discrimination.

“We strongly support religious freedom, but that principle doesn’t mean the right to discriminate against or harm other Georgians,” Garrett said. “We hope that other states that are considering similar bills will heed the lessons learned from Georgia and reject discriminatory measures in their states.”

To be sure, the bill that Deal vetoed would have enshrined discrimination into law. But even without it, LGBT people are still treated as second class citizens. There are no laws in Georgia protecting people against employee or housing discrimination on the basis of sexual orientation or gender identity.

Better states have passed bills extending those protections to everyone. Georgia is in the news today for not passing a bill legalizing further discrimination.

March 28, 2016 Before the Wisconsin Primaries, "I'm an Atheist and I Vote" Billboards Go Up Around Madison
Browse Our Archives
What Are Your Thoughts?leave a comment