It’s the height of hypocrisy for a self-styled “religious freedom” advocate to suggest targeting religious communities.

But just days after Republican presidential hopeful Ted Cruz was talking about the need to “patrol and secure Muslim neighborhoods,” Fox News’ Todd Starnes was arguing that Cruz was the “only hope” for religious liberty. (I guess we can official mark the “time of death” on irony’s death certificate.) 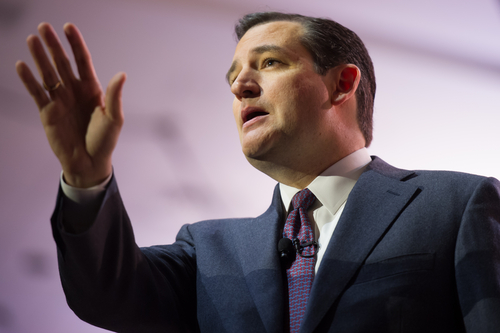 America’s Christian bakers and florists and wedding planners will be safe under a Ted Cruz presidency.

Entire American Muslim communities, however? Not so much. They have to answer for the crimes committed on another continent by entirely separate people who happen to pray to the same God. But don’t worry because Christian business owners who want to discriminate on the basis of sexual orientation will be safe. Hallelujah!

Discussing the recommendations put forth by Cruz’s Religious Liberty Advisory Council, he says

The council released exclusively to me its initial recommendations for both legislative and executive actions that will restore the nation’s First Freedom — the freedom of religion.

So what are we looking at?

Among the policies recommended to Cruz:

— Rescind Executive Order 13672 — an order that requires certain federal contractors to not discriminate on the basis of sexual orientation and gender identity;

— Direct all federal agencies to stop interpreting “sex” to include “sexual orientation” and/or “gender identity.”

— Direct the Department of Health and Human Services to eliminate its requirement that all employers include coverage for all FDA-approved contraceptive methods and sterilization procedures;

— Review and clarify existing Department of Education guidance on prayer at school to ensure it adequately explains the rights of students, teachers and other employees to live out their faith.

The council also urged Cruz to protect the religious liberty of military personnel — especially the rights of chaplains.

Even aside from blocking the protection of LGBT people from discrimination and stopping coverage of contraceptives, these ideas are troubling. After all, this is Todd Starnes and the Christian Right we’re talking about. “Religious liberty” for them isn’t a personal right to live as a person sees fit, but rather government sanctions forcing others to live the way conservative Christians want them to. Anything less amounts to persecution.

So when they talk about “protecting” the religious rights of teachers, preachers, and military personnel, it’s important to remember that those rights aren’t in any way in danger. They’re not protecting those people from anything. Instead, they’re trying to enshrine religious privilege.

The fact is, Christian supremacists like Cruz and Starnes have no interest in defending religious liberty. They want to erode it in order to promote their own faith.

March 27, 2016
The Invocation Policy in Greene County (TN) is Unconstitutional and No One There Seems to Know Why
Next Post

March 27, 2016 Hate Pastor Condemns Baptists Who Marry Outside the Faith: "Catholics Aren't Christians!"
Browse Our Archives
What Are Your Thoughts?leave a comment