Filipino Man Literally Nails Himself to a Cross Every Year to Honor Jesus March 27, 2016 Hemant Mehta

It’s one thing to celebrate Easter weekend. It’s another thing to do a crucifixion reenactment in which you allow four-inch stainless steel nails to be hammered through your hands and feet in honor of Jesus. That’s what Ruben Enaje has done for 30 years running now in the Philippines. Because I don’t know why. 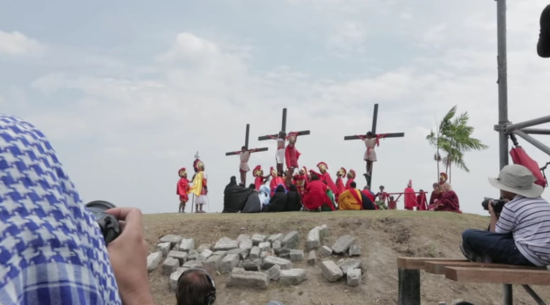 Ruben Enaje and “14 other men, some screaming in pain, were nailed to wooden crosses by actors dressed as Roman centurions” in rice-farming villages in the Pampanga province north of Manila, while “thousands of foreign and local tourists snapped pictures” of the re-enactment, according to The Associated Press.

“The only thing in my mind is that God went through worse,” Enaje said, according to the AP.

How is everyone in that documentary snapping pictures and not running around screaming, “WHAT THE FUCK ARE YOU PEOPLE DOING?!” That’s religious delusion for you, though: You begin to do things on the basis of faith that would never be justified without it.

At least in this case, Enaje is only harming himself. After so many examples in the U.S. of Christians hurting other people due to their faith-based reasoning, this is almost refreshing. Crazy… but refreshing.

March 27, 2016
Mexicans Will Destroy a Donald Trump Effigy to Celebrate Easter
Next Post

March 27, 2016 A UK Church Ordered Easter Banners That Accidentally Said "Chris Has Risen"
Browse Our Archives
What Are Your Thoughts?leave a comment