Televangelist Jim Bakker: Christians Who Pray at Graduations Will Soon Be Killed with Machine Guns

Televangelist Jim Bakker has figured out the Donald Trump secret to success: Always say the dumbest, most provocative things you can, and people will keep talking about you.

Granted, they’ll point out how much of an idiot you are, but if that’s the price of admission, so be it.

Bakker’s latest comment involves comparing the U.S. government to ISIS… because both go after Christians in basically the same way. And if American Christians don’t watch out, they’ll also pay for their prayers with their lives. 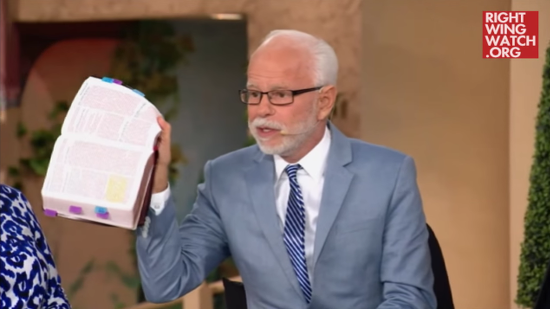 BAKKER: It’s over, people! The Gospel is over in the United States of American if we’re not careful! We have turned our back on the Bible! We can’t preach the Bible anymore!… How could it be that it’s been almost illegal to say “Merry Christmas”? The big department store says “You cannot say ‘Merry Christmas'” — they said it. I know people who work at those stores… they were told “Do not say ‘Merry Christmas’ anymore.”…

WILES: … Who says you can’t pray [at a high school graduation]? A stupid judge 500 miles away in a courthouse says you can’t pray?… So what happens if, in that graduation, most of the parents stand up and recite the Lord’s Prayer? What are they going to do? Is the judge going to come over and arrest you? Let’s get an uprising going.

WILES: So what if they did? They’re going to come in and shoot 500 parents at a high school graduation for saying the Lord’s Prayer?

BAKKER: Not right now. But eventually they will if we don’t stop it.

Needless to say, Christians can preach the Bible, it’s legal to say “Merry Christmas” though it might exclude potential customers at your store, and parents are allowed to pray at a graduation. The ACLU and every church/state separation group out there support these things.

Bakker’s fantasy that he would be gunned down for praying is just that. It’s the same nasty conspiratorial, “everyone’s out to get you” rhetoric used by Trump and Ted Cruz. And it’s all bullshit.

March 25, 2016 Atheist Calls for Unity and Decency in Secular Invocation at Jacksonville (FL) City Council Meeting
Browse Our Archives
What Are Your Thoughts?leave a comment