This Christian Mom’s Rapping is Almost as Bad as Her Anti-Transgender Message March 24, 2016 Hemant Mehta

Since bathroom use for transgender people is a big topic in the news right now, it makes sense that artists would want to weigh in on the controversy. Thankfully, MH Wiebe, a mother from Alberta, has put everyone else to shame with her new rap song “Gender Bender“: 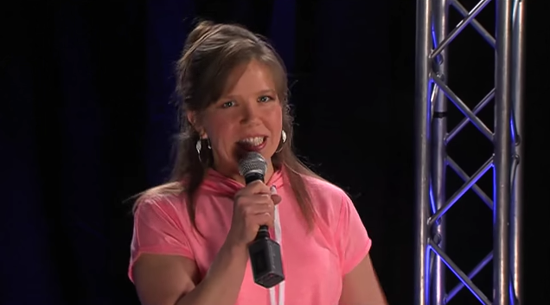 If we can’t address male and female,
We’ve lost our purpose, in life we fail.
If our children lose their identity,
This will be sad for our future, you see.

My heart goes to the fatherless and abused,
And I guess that’s why we have some confused.
I am a concerned mother of three.
Keep male and female washrooms where our children can pee!

Forget banning transgender people from certain bathrooms. How do we ban Canadians from singing?

The concerned mom’s charming Alberta accent makes transphobia seem like a cute, provincial “howdy” rather than the root of sweeping violence and murder…

It should be stated that much of the rap grossly mismanages facts. For instance: Transgender bathroom access does not mean boys and girls are forced to pee together — it means that trans girls aren’t forced to pee with boys and trans boys aren’t all up in the ladies room. And despite one concerned Canadian mom’s alleged expertise on the animal kingdom, there are several species that have been known to show gender-fluid characteristics.

So laugh at the video all you want, but it just shows how ignorant many Christians are about this issue. For something as simple as going to the bathroom, they want trans people to suffer. And they’ll create hypothetical horror stories — and whatever you call the opposite of ear candy — to illustrate a problem that doesn’t exist.

(Thanks to Carlos for the link)

March 24, 2016
For the First Time, There Are More Atheists in Norway Than Believers
Next Post

March 24, 2016 New Phoenix (AZ) City Council Policy Allows Only Christian Chaplains to Give Invocation Prayers
Browse Our Archives
What Are Your Thoughts?leave a comment