The War on Easter Has Finally Begun and Chocolate Companies Are Caught in the Crossfire March 24, 2016 Hemant Mehta

According to David Marshall, creator of the Meaningful Chocolate Company, some chocolate manufacturers are taking Easter out of the names of their products — and this is blasphemous because they’re making products without acknowledging the resurrection of Jesus. 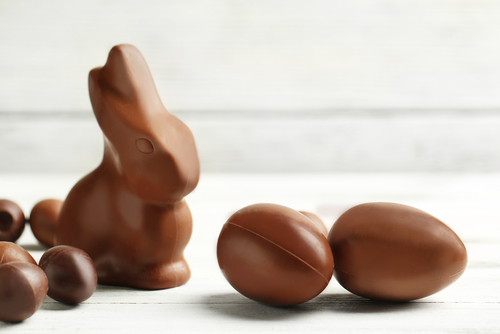 … Marshall said: “It’s deeply disappointing and shameful that some of the biggest companies in the country are censoring the centuries’ old tradition.

“It shows they’re insensitive and uncomfortable with the Christian faith,” he said. His company’s Fairtrade charity continues to use “Real Easter Egg” on the packaging of its Easter products. In a survey conducted by the company to, 79% of 2,000 respondents wanted to see Easter used in the branding of seasonal chocolate products.

It’s a little funny, though, for anyone to talk about how these companies are “insensitive and uncomfortable” with Christianity when we’re talking about chocolate bunnies and eggs. It’s not like either of those objects appear in the Bible. They’re modern traditions that don’t originate in the Church.

Complaining about it makes as much sense as a pastor saying that replacing Santa Claus on a Coca-Cola can is somehow anti-Christian. You might want to think that one through a bit more…